Yes, there is "a" devil -- in fact, there are tons of them, and they're called daimones. But, they are not responsible for evil, nor are the gods.

Just as it is my belief that Iao Sabaoth (the Jewish god), Jesus, and Allah all exist, but are not what the proponents of the monotheistic religions think they are (nor are they all the same), so too do I believe that what those religions refer to as devils do exist, but they're not quite what they think they are. There isn't one big one who is in charge in a way comparable to the one god of those faiths. Daimones can have negative and even malevolent feelings toward humans, and can be selfish, wantonly destructive, erratic, and harmful. They can even be the unwitting scapegoats for human failings and the very epitome of the "rejected other," which would put them in a mind to not be very favorable or loving toward humans in the first place. They can also be much better than that, both by nature and if approached equitably and dealt with fairly. If we would deal equitably with our fellows, we should likewise do so to the various types of divine beings, up to and including daimones, as equally as gods, ancestors, and nature spirits.

The question of evil, though, is one entirely of human making, and the origin of evil would tend to be human in almost every case. A tsunami killing hundreds of thousands of people and causing untold damage across nations is not evil; it's simply something unfortunate that happened. Government officials not providing aid to hurricane victims in their own country, particularly when they could have prevented some of the worst damage beforehand, however, is evil, because it involved an active volition on the part of humans to be indifferent to the sufferings of others. It involved the choice not to act to remedy the situation when they were fully capable of doing so.

Human will and choice is where most of the good and the evil in the world starts. And, perhaps more frightening than any devil and more awesome than any god, is the fact that we have the potential to be both of these things almost at all times.

The Bible is Not a Jigsaw Puzzle
Frank Viola
2 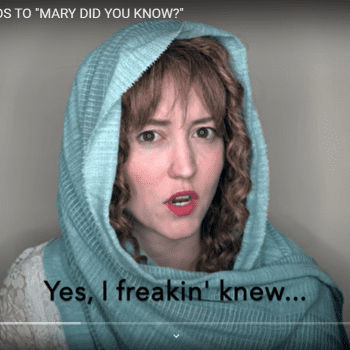 Ark Encounter Ticket Sales Continued to Plummet in January Due to COVID-19
Hemant Mehta
Get Patheos Newsletters
Get the latest from Patheos by signing up for our newsletters. Try our 3 most popular, or select from our huge collection of unique and thought-provoking newsletters.
From time to time you will also receive Special Offers from our partners that help us make this content free for you. You can opt out of these offers at any time.
see our full list of newsletters
Editor's picks See all columnists