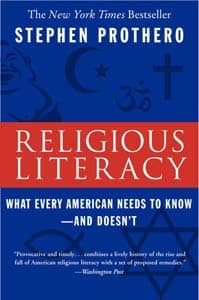 Unlike many who want to bring religion back into the public schools, Prothero does not have a theological or religious agenda. He argues on secular grounds that, "Americans are not equipped for citizenship (or, for that matter, cocktail party conversation) without a basic understanding of Christianity and the world's major religions."

Complete with a dictionary of key beliefs, characters, and stories about Christianity, Islam, Judaism and the other major world religions, RELIGIOUS LITERACY is a provocative book that is sure to generate a national discussion.

Stephen Prothero is a religion professor at Boston University. His book American Jesus was named one of the best religion books of 2003 by Publisher's Weekly, and one of the year's best nonfiction books by the Chicago Tribune. Prothero writes and reviews for The New York Times Magazine, Wall Street Journal, Boston Globe, Washington Post, Los Angeles Times, Salon, and other publications. He holds degrees in American Religion from Harvard and Yale. Prothero lives on Cape Cod. For more information, please visit www.stephenprothero.com.

Take this quiz on Religious Literacy.