The Rise of Conservative Christian Women 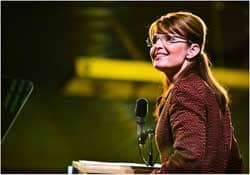 With the improbable victory of Christine O'Donnell in the Delaware Republican primary, this has become the year of the new Republican woman. We don't yet know how the elections will turn out, but Republican candidates Carly Fiorina in California, Nikki Haley in South Carolina, and Sharron Angle in Nevada -- with the "mama grizzly" Sarah Palin looming behind them -- have altered America's political landscape and heralded surging female power in the GOP. The success of these candidates has sent the political left and its segment of the blogosphere into a particular kind of frenzy about the ostensible "radicalism" of the women of the GOP. The root of this frenzy is fear not just of conservative women, but of something that seems even more malevolent to the secular Left: evangelical conservative women.

The prominence of Christian female power brokers in American politics is nothing new. Going back to the colonial era, the story of American religion has disproportionately been the story of women. In essentially every Christian denomination at any period of American history, women have been the majority of congregants. And although they have often been excluded from pastoral leadership, women have found all kinds of ways to lead in the church, and in political causes championed by churches. The temperance (anti-alcohol) movement produced Frances Willard, one of America's most powerful reform leaders of the 19th century. More recently, Phyllis Schlafly of the Eagle Forum was probably the person most responsible for the defeat of the feminist Equal Rights Amendment of the 1970s, and Beverly La Haye founded Concerned Women for America, an organization that mobilized hundreds of thousands of American women to support the pro-life movement and traditional marriage.

The nomination of Sarah Palin as John McCain's Vice-Presidential candidate, however, brought conservative Christian women to new heights of prominence. Palin has famously been attacked on a number of fronts, from her initial unfamiliarity with basic political issues, to the questionable timing of her departure as Alaska's governor. But one consistent theme of the criticisms against Palin has also been the supposed religious radicalism nurtured in her Assemblies of God congregation in Wasilla. Millions of viewers watched a YouTube clip from 2005 in which people in the Wasilla Assemblies of God laid hands on Palin while a Kenyan pastor asked God, among other things, to protect her against "every form of witchcraft."

The titillating specter of witchcraft has sprung up again with the GOP's nomination of Christine O'Donnell, a one-time evangelical who subsequently converted to the Catholicism of her youth. During a 1999 appearance on Bill Maher's "Politically Incorrect," she indiscreetly noted that she had dabbled in witchcraft as a youth. Until her nomination, O'Donnell had primarily established herself as an advocate of abstinence from sex before marriage. O'Donnell also told Bill Maher in a 1998 taping that evolution was a "myth."

Sharron Angle, the Tea Party's proverbial fly in the GOP ointment in Nevada's U.S. Senate race, has likewise elicited murmurs of fanaticism because of her defense of homeschooling, second amendment rights, and her claim that Americans' dependence on government programs represented a form of "idolatry." A writer for Slate has even trotted out the tired accusation that Angle is a "Christian Reconstructionist" who seeks to replace modern statutes with the law of the Old Testament.

Palin, O'Donnell, and Angle are the three most prominent evangelical bogeywomen of the campaign, but even the relatively moderate faiths of Carly Fiorina and Nikki Haley have become issues of concern for the left. Fiorina has been more reticent about her beliefs, but she has openly affiliated with Chicago megachurch pastor Bill Hybels, and her opposition to abortion and support for traditional marriage have earned her the extremist label in some circles. Critics have also murmured about her pandering to evangelicals in making a recent personal trip to the Holy Land. Haley's faith, conversely, became a matter of some controversy during the South Carolina gubernatorial primary, as some raised questions about whether her conversion from Sikhism to Christianity was sincere. Haley responded by making her heartfelt faith in Jesus clear, noting that she seeks to "live for Christ every day."

Like it or not, the rise of the evangelical women of the GOP signals a power shift that is here to stay. Evangelicalism shows no sign of flagging, culturally or politically, and women have a more prominent place in the evangelical firmament than ever. Whatever her faults as a politician, Sarah Palin has tapped into a formidable segment of the American electorate: conservative Christian women (along with legions of admiring evangelical men). She has also helped to dissolve remaining hesitations some evangelicals felt about the public role of women in American politics. The Left will no doubt successfully brand some of these candidates -- O'Donnell is the ripest target -- as "extremists.

" But these are candidates who represent the public faith of many average churchgoers, including tens of millions of American women.

Thomas S. Kidd is Senior Fellow at the Institute for Studies of Religion, Baylor University, and author of God of Liberty: A Religious History of the American Revolution (Basic Books).