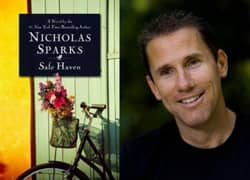 “Love doesn’t mean anything if you’re not willing to make a commitment.”

Though that line is spoken by one of the characters in Nicholas Sparks’ new novel Safe Haven, it’s a viewpoint the best-selling author shares.

With the success of books and movies like The Notebook and Dear John, Sparks has a well-founded reputation for being able to craft romantic stories that touch people’s hearts. But romance alone isn’t enough to create a meaningful, lasting relationship like he’s had with his wife Cathy for over twenty years.

In a recent interview with Christopher Closeup, Sparks explained that he once had a debate with his brother Micah about this very topic. Micah suggested that communication is most important in a relationship. That led Nicholas to ask, “What does communication matter if you’re not committed to each other? People who’ve been married a long time or been in any relationship -- whether it’s with your parents or with your children -- you know that emotionally, it’s going to go up and down. Love is not a straight line. If you’re committed, you know you’ll work through whatever’s keeping you down, that you’ll come out on the other side, and it will get better again.”

Sparks acknowledges that there are times when he and his wife don’t get along for a while. Their commitment, however, motivates them to improve things and provides “a source of stability.” The couple’s Catholic faith also keeps their relationship grounded and on the right track by directing their minds and hearts toward a higher reality. Sparks says that praying daily and attending Mass every week serves as a reminder that, “There’s more out there. The world doesn’t just revolve around you.”

Commitment through difficult times has been a factor in Nicholas Sparks’ relationship with God too. Both his parents were killed in accidents and his sister died of brain cancer, so the author admits to having some angry conversations with the Creator over the years. Yet Sparks sees even those times as having a positive spiritual effect because he talks to God constantly. He says, “You think of God as your Father, but fathers and sons hopefully become friends. My view is that it’s less blasphemous than honest. I think He likes the fact that you’re talking to Him.”

The struggles that Sparks has faced incorporate their way into his novels through all his characters having wounds they need to deal with. For instance, in his new novel Safe Haven, Alex is a widower raising two kids on his own while Katie has secrets she fears will bring harm to herself and others. The author believes these wounds are what make his characters relatable because everyone strives to recover from problems and pains. He says, “It’s your wounds as well as your successes and how you deal with them that really define who you are as a person.”

The importance of commitments -- and the “safe havens” that can be established within them -- has played itself out in Sparks’ life in other ways. In the years he spent as track and field coach for New Bern High School, Sparks helped many teens with tough backgrounds gain a new definition of themselves as people. He not only led the team to state and national championships, but New Bern High School was recently voted the greatest high school relay team in history. How did he do it? The longer he coached, the more he realized that success depended more on mental attitude than physical training and telling them over and over, “Champions perform best when it counts the most.”

The author’s goal went beyond awards though. Most of the team members were poor and came from broken homes. The path they were on would likely have led to them dropping out. Sparks helped them believe they each possessed God-given potential and pushed them toward reaching it. The results: “I got 60 or 70 disadvantaged kids off to college on scholarship, another chunk went into the military. Nearly every one of them is moving forward.”

Sparks continues to move forward himself with a focus on writing more books, helping others, and maintaining his connection to God. Despite challenges that could have led him to lose his faith, Sparks sees God’s presence in the world around us and believes faith in Him is a reasonable, intellectual conclusion.

Citing an argument from C.S. Lewis, he explains, “If you say everything is evolutionary and there is no God, where does altruism come from? We’re not talking philanthropy where you go and get media attention. We’re talking about doing something good for someone that no one else knows about . . . If I have a little bit of food and I give some to someone who has none, I might also die this winter. There is no evolutionary benefit to it. Where does that come from? Isn’t that what we learn that God is? God is unconditional love. To me, that is a very sound argument for the existence of God.”

For a believer, then, the commitment between Creator and created is another “safe haven.” Of grace.