Separate but Not Equal 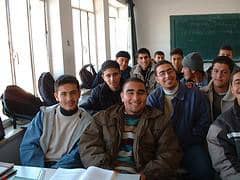 It’s morning in Jaljulia, a small, sleepy Arab village in central Israel. A bumpy main street is lined with small grocery shops, clothing and hardware stores, and the occasional coffee house. Sparse hills are covered with squat, multi-story concrete houses. There are no sidewalks. Beneath bobbing backpacks, students walk in the middle of the roads on their way to school. The older children head to a limestone building, surrounded by a chain-link fence. It’s the Jaljulia Education and Science High School, which serves the village and neighboring Kfar Bara. Its principal is Khalid Arar, a tall, wiry, 38-year-old former national karate champion with a Ph.D. in education from Tel Aviv University. He strides into the teachers’ lounge as the school day begins with a bell playing the Disney tune, “It’s a Small World.”

Schools around the world are microcosms of their societies, and this Jaljulia school is no different. Arar’s world is full of problems. His car was torched and part of the school set on fire by students angry over his crackdown on test cheating. His 460-student school suffers from low achievement, high drop-out rates, and violence. There is no gym or money for extracurricular activities for his charges. “So they are in the streets after class is let out,” Arar says, looking out a window, his gaze hardening. “And that is where the violence starts.”

Although fairly new, the building was constructed without air conditioning: Funds were later raised within the village for window units. Teaching materials and equipment are limited: Only seven of twenty-five computers function. Arar manages to outfit science labs with donations from universities where he has connections. Space is at a premium: In one Hebrew grammar class for 12th graders, forty-one students, some without desks, are squeezed into a room. A young teacher in a white headscarf is deconstructing l’gdol, the Hebrew verb for “grow.” The kids are rowdy, and the teacher is forced to raise her voice to be heard.

Outside the building, a 15-year-old girl, wearing jeans and a snug headscarf, delicately balances a notebook on her knees. Saja Shrem tells me she and her friends, sitting beside her on the steps, should be in algebra class. But on Wednesdays the English class needs the room, and algebra is canceled. “We are disappointed,” she says bluntly. “We have class, but really we’re sitting outside and not learning.”

Nearly everywhere you look -- not just on the steps of Jaljulia’s high school -- Israel’s public education system is in trouble. Poor teaching, overcrowding, and discipline problems, set against the backdrop of the ever-widening gap between the country’s wealthy and poor, mean that Israeli students -- both Jewish and Arab -- are now scoring near the bottom on international tests. But the situation is the most dire for Israel’s half-million Arab children and teenagers, who mainly live in self-contained towns and villages in the north and central Israel and the Negev, or in mixed urban centers such as Haifa and Yaffo.

Some wealthy and middle-class Arab parents, in particular those from the small, more educated Christian minority, send their children to private or well-funded parochial schools. But many Arab students, such as Shrem, attend public schools, which in Israel are segregated. Ultra-Orthodox, modern Orthodox, and secular Jews each have their own public schools, as do Arabs.

Officially, Arab students can attend Israel’s Jewish public schools but only one percent does. Even in Haifa, which is more integrated than most communities, the number is not much higher. Almost no Jewish students attend Arab schools due to cultural and language barriers: While Arab children learn Hebrew from 3rd grade on, Arabic is only compulsory for Jewish students in secular schools from 7th to 9th grades. While a new pilot program is making Arabic mandatory in 170 schools starting in 5th grade, currently most Jewish students speak only a smattering when they graduate.

Theoretically, Arab and Jewish schools are equal. In reality, the infrastructure of Arab schools is generally poorer than that of Jewish schools and achievement rates are significantly lower: Barely 32 percent of Arab students pass the university matriculation exam, called the bagrut in Hebrew, compared to nearly 60 percent of their Jewish counterparts. The reasons are multifold, but paramount are decades of unequal attention and funding. The difference in funding varies by study: This year the Organization for Economic Cooperation and Development (OECD), which Israel was invited to join in June, concluded that public spending per Arab child, although improved over the past decade, is still one-third less than public spending on a Jewish child. In 2005, the American-based New Israel Fund found the state education budget had provided approximately $200 per Arab child compared to $1,000 for a Jewish one.