Though it comes from the pre-internet era, this essay by Orson Scott Card on effecting change in the Church reflects some of the tensions still found among LDS today. Also note that comments on Dialogue and Sunstone are a snapshot which reflect that particular time period. Every website and publication changes over time, particularly with changes in editorial control. We at the Mormon Portal do not intend Card's comments to apply to any particular publications or websites today. More important is his elaboration of D&C 121 and greater use of persuasion, long-suffering, meekness, etc. 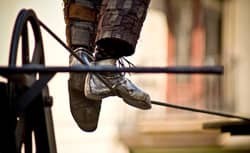 We were so smug, we Westerners, we Christians, we Mormons, when the Moslem world convulsed and bled over a mere book, a splash of words, a fillip of decorative art. People died in a riot in Pakistan -- and for what? Because they thought our embassy bookstore was selling Satanic Verses, a work of fiction, a novel. And then the Ayatollah Khomeini pronounced a death sentence on the author and urged Muslims to carry out the sentence as privateers, with a reward guaranteed.

Outrageous, disgusting -- we, the civilized West, would never act that way.

Fear and Loathing in Zion
Then my mother sent me a clipping from a Utah paper, telling how Ed Firmage, noted Utah Democrat and grandson of Hugh B. Brown, had provoked outrage by asserting that his fond wish was to see four blacks among the General Authorities of the LDS Church -- three of them women. Just to make sure we Mormons, at least, could not pass ourselves off as wholly civilized, many volunteers in the Mormon community had made anonymous phone calls to the Firmages, many of them with veiled and not-so-veiled death threats. "You can be removed," they said.

Apparently there are some followers of the Ayatollah among the Saints.

These events happened to be juxtaposed with general conference, in which two speakers addressed the issue of critical voices within the Church. Bishop Glenn Pace's talk stated that criticism of the Church from within was the most dangerous kind. Immediately afterward Elder Dallin Oaks urged us to be extremely selective in choosing to participate in the various unofficial "alternative voices."

And then a friend sent me a clipping of Eugene England's protest on BYU's policy of discouraging its faculty from publishing in Dialogue and this very magazine.

Thus coincidence suggested to me that two continuously overlapping groups within the Church -- the hierarchy and the intelligentsia -- are in the process of tearing themselves into rival camps. The very division is a monstrous deformation of the way the Church is meant to function -- indeed, Elder Oaks's talk can and should be read as a careful but heartfelt attempt to keep that rift from widening. [Ed. See complimentary interpretation of that talk by Armand Mauss with approving comment from Elder Oaks.]

I could imagine the reactions of many of my friends -- many of you who read this magazine, I believe. Applause for Eugene England's spirited defense of alternate LDS magazines; a slow burn as Elder Pace warned against criticism of the Church by Church members; a certain wariness throughout Elder Oak's talk; instant solidarity with Ed Firmage in his victimization by the pinheads of Mormondom.

There is another way of looking at this, however. A truer way. Those among us who feel injured or oppressed by the hierarchy's policies and attitudes must remember that the finger of blame points both ways.

Perhaps the easiest and clearest way to understand our own situation is to look at what happened in the cultural and religious community of Islam.

Good Guys and Bad Guys
I watched with a mixture of gratification and embarrassment as every writer’s organization in America expressed its solidarity with Salman Rushdie, the man whose book, Satanic Verses, led to the Ayatollah Khomeini pronouncing a death sentence upon him.