And the Angels Danced: The Habit of Witness

Patheos' "The Habit of Witness" series features essays written by consecrated Catholic women and men sharing their experiences while dressed in the habit. In this fifth installment, a Carmelite sister shares an encounter that settled one man's mind and heart, and rebuked "centuries of ignorance and prejudice."

It was a magnificent winter evening, the air crisp and cold as the distant sun began to descend behind the oil derricks in Carson, California. Our convent car gave a shudder as I turned the key in the ignition and carefully backed out of the driveway. Yes, I would be there on time! Prayers at our nearby convent began promptly at 5:00 p.m. and I was looking forward to joining my other Carmelite Sisters in singing God's praises. Little did I know, as I made my left turn onto Sepulveda Boulevard, that this would be no ordinary journey.

Just past Wilmington Avenue, the car wheezed and coughed, as if catching an enormous cold from the onslaught of icy wind slapping its windshield. It sputtered to a graceful stop as I eased it nearer the curb. It took me a full minute to assess the situation -- do I stand on the side of the road as a hitchhiker would, or do I start walking back home? I closed my eyes and said a quick prayer, asking my guardian angel to help me decide what to do.

Cars were whizzing by, eager to get home for the supper hour. Finishing my prayer, I thought, "Well, at least, they will see me; in my long Carmelite habit and veil, I will stand out."

Exiting the car, I dashed to the street meridian, where I joined a beautiful young Hispanic girl who was selling bouquets of flowers. I introduced myself and explained my situation in broken Spanish and she replied, "Dios se le bendiga," which means "God bless you."

Sunset came. My new friend began to pack up her unsold flowers, and I suddenly spied the Spires Restaurant. A lot of big trucks were parked nearby. Truckers! My answer had come! Saying good-bye to my newfound friend, I went to the crosswalk and, feeling like Julie Andrews in the Sound of Music scene where she is toting that suitcase down the street singing, "I have confidence," I lifted my head and walked steadfastly and confidently into Spires Restaurant.

Warmth enveloped me as I stood in the entrance. "Excuse me, can anyone help me, please? My car just died outside."

About twenty sets of eyes turned toward this shuddering Carmelite, who remained hopeful that chivalry was not yet dead, and that charity still resided in the human heart.

A man seated at the counter purposefully got up and walked over to me. "Roosevelt's my name," he offered. Roosevelt appeared to me to be in his 60s. "Take me to that car and we'll see what we can do."

I led him out onto the nearby street and he said, "Can't fix it here. Have to bring it in. I'll get my truck and push you into the parking lot. You just steer." By the time we made it back to the lot, prayers at our convent had already started. I was going to be late . . .  again!

Roosevelt tinkered with the car's innards. "Yup, that's it. Battery's dead." He proceeded to take jumper cables out of his truck and attached them to our convent car. "This will take about fifteen minutes," he said. "May I buy you a cup of coffee?"

Now that the sun had totally set, it was getting colder. I accepted his offer, gratefully.

We talked as we warmed our hands on hot mugs of coffee. A quarter-hour later the car was fixed; its battery had been recharged. I turned to thank Roosevelt. It was only then that I saw the tears in his eyes. "What's the matter, Roosevelt," I asked. "Why are you crying?"

"May I tell you why I fixed your car?"

"Yes, of course," I answered, not knowing quite what to expect.

"I was born a long time ago in Mississippi. We were very poor. Every winter I contracted pneumonia as a child -- our house was so poor. One year, I must have been about 10 or so, I was rushed to the hospital. With no antibiotics (recall this is in the 1930s, so antibiotics had not yet been discovered,) pneumonia caused the death of many children. The doctors had just told my mother that I would not last the night.

"That evening two Catholic Sisters, dressed just like you, entered my hospital room. I had a high, high fever and I remember one of the sisters came by my bed, put her cool hand on my forehead, and prayed for me. I didn't know what to do, or how to respond. I had been taught that no black could dare get near a white woman. And now here was this white Catholic nun, not only placing her hand on my head, but praying to God with all her heart for me. I had never heard nor seen anything like it. That's just how it was in those days. That's just how it was.

"Well, the next day my fever was gone. The doctor said I had passed the crisis; he didn't know why or how. But I knew. I never saw the Catholic sisters again. Throughout all these following years, I have wished I could find them and thank them. Today, just now, when you came into the restaurant and asked for help, I said to myself, ‘Roosevelt, your time has come to thank the sisters.' That's why I got up and offered my help. It was finally my time to return the favor."

By now tears were glistening down both our faces. It was a sacred moment. The windy parking lot of Spires Restaurant became a sacred place. We were standing on holy ground. Yes, times have changed. Thank God!

I looked up at Roosevelt; he stood at least a foot taller than I, and I asked with immeasurable respect and reflection, "Roosevelt, may I hug you?"

A big smile spread across his face as he turned to me and answered, "Yes, ma'am." At that moment in time, right there, a cold and frigid night, just off Sepulveda Boulevard, two of God's children embraced, shattering centuries of ignorance and prejudice.

More than a battery was made right that evening . . . and the angels danced! 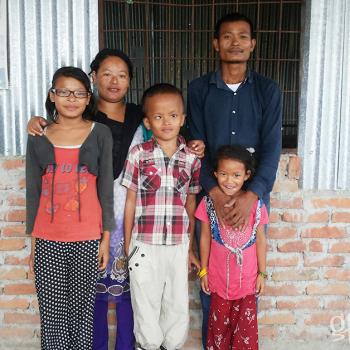 Anxiety in the Delivery Room: How a Gospel for Asia Bridge of Hope Center Gave...
GFA Staff Writer
3 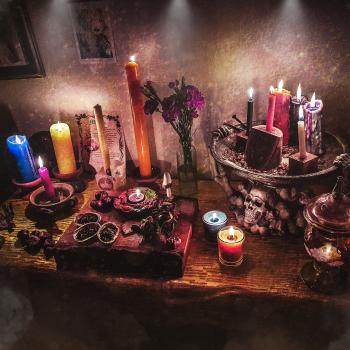 The Autumn Equinox season
Rachel Patterson
Get Patheos Newsletters
Get the latest from Patheos by signing up for our newsletters. Try our 3 most popular, or select from our huge collection of unique and thought-provoking newsletters.
From time to time you will also receive Special Offers from our partners that help us make this content free for you. You can opt out of these offers at any time.
see our full list of newsletters
Editor's picks See all columnists