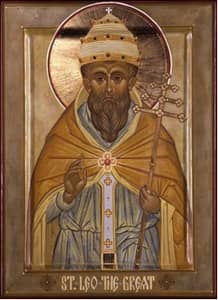 Pope St. Leo the Great reigned twenty-one years as pope in the 5th century. (He was Pope Leo "the First," and the first pope to later be called "The Great.") His claim to fame, among other things, is that Leo was known for turning back Attila the Hun from sacking Rome, and he did so without military might. Here's the story . . .

Attila the Hun was busy ransacking the countryside and most of Italy. His plan included the sack of Rome. Attila hoped to add it to his real estate holdings, thinking it a surefire way to impress his then-girlfriend, whom he was intent on adding to his collection of wives.

So, it would seem, Leo was in trouble, seeing that he and Attila were somewhat at cross-purposes -- Leo, wanting to protect Rome and keep its citizens alive, and Attila looking to attack and plunder the city.

Talk about a tough ministry assignment for Leo! Given the mounting evidence of the other cities and towns that had fallen under Attila's bulldozing ways, I'd say that Leo might be down to his last prayer. But prayer is exactly how Leo approached the situation.

Pope Leo promptly committed his papacy to the patronage and protection of St. Peter, the apostle and first pope.

What's more, Leo had arranged a meeting with Attila outside of the city.

Hmmm . . . can you picture the pope's secretary fretting just a bit over this?

Um, uh, Holy Father? A meeting with a bloodthirsty murdering barbarian might be a tricky bit of diplomacy to pull off, you know . . .  Let's recall that Mr. Attila delights in burning churches, killing clergy, raping and maiming townspeople just for sport! He's devastated the countryside! Oh, and by the way, Your Holiness, Attila is a savage terrorist whose nickname is the "Scourge of GOD"???

But Leo is committed to go out and hold a meeting with Attila.

Can you imagine? Everyone probably thinks that Leo is a goner -- a sure martyr for the faith.

But Pope Leo dutifully travels outside of Rome to meet Attila.

And then, one of the most dramatic moments in Christian history takes place:  Attila calls off the sack of Rome. And Leo goes back to Rome rejoicing.

What? That doesn't add up!

Christian archival writings suggest that while Attila and Leo were conversing, Attila was shaking in his barbarian boots!  For, it is said, that during that conversation, St. Peter himself, in priestly garb, was hovering over Leo's head . . . with a sword! Peter was ready to skewer Attila if he did not comply!

(My own take on this? Of all the disciples in the Garden of Gethsemane on the night of Jesus' arrest, I seem to recall it was Peter who was the jumpy one.  He was the one who rose up against the Roman guard, cutting off the ear of Malchus! I wonder if St. Pete assumed a similarly impatient and twitchy posture over Leo's head? Just a thought. And now back to our regularly scheduled posting.)

Anyway, thankfully, Pope Leo is credited with saving Rome from the King of the Huns.

Now I tell you that story of St. Leo so you know the kind of person who would challenge us with this:  "Christian recognize your dignity and, now that you share in God's own nature, do not return to your former base by sinning. Remember who is your head and of whose body you are a member. Never forget that you have been rescued from the power of darkness and brought into the light of the Kingdom of God."

Remember who you are! And most especially Christian, remember whose you are.

Every Christian needs to have those two qualities: to know who they are, and to know whose they are.

Most especially, the baptism of the Christian removes the stain of sin, and calls one to a life dedicated to avoiding it in the future! The call to holiness requires prayer and dedication and virtue. Sometimes it requires you to stand and fight. Or not.

Remember who is your head and of whose body you are a member . . .

This is the dignity of the Children of God, by virtue of baptism. Jesus is the head, and they are the body -- but even more familial is that they know they have access to a perfect Father in Heaven that surpasses all their worldly images of fatherhood, and a powerful communion of saints at their disposal on the other side of the veil.

Never forget that you have been rescued from the power of darkness and brought into the light of the Kingdom of God.

Rome was rescued under Pope St. Leo the Great. To this day, the Church does not forget its rescue. May we be ever mindful of every deliverance from sin or trial.

Pope St. Leo the Great, on this your feast day, pray for us!