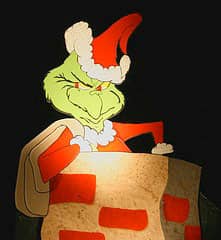 The weekend before Thanksgiving I went grocery shopping with my sister. We each needed a wide variety of things so we stopped into that American staple: Walmart. To our dismay it was packed with holiday shoppers. Angry shoppers. Pushy shoppers. Shoppers who block an entire aisle without remorse as they contemplate the merits of different dish soaps. Being pushed, prodded, shoved, and blocked from reaching they very few items I needed, I left the store feeling harassed, dogged, and given no quarter by that behemoth called Christmas.

As a Pagan I only celebrate Christmas because my family does, and I’m not going to hurt my nieces’ and nephews’ feelings by being a stick in the mud. I have no issue with Chanukah or Ramadan. I adore the quiet simplicity of Solstice and the gentle merriment of Yule. When it comes to Christmas, I get angry. I loathe it. I despise it. It’s not a holiday; it’s a juggernaut. It’s an onslaught of commercialism that you must embrace or be considered less of a person.

Most people who talk about the “War On Christmas” don’t realize that Christmas is a tool of war. You cannot escape it. Every store plays Christmas music, has Christmas displays, sells Christmas themed products and is full of angry, frustrated, pushy people who celebrate the birth of Christ. For parents it’s even worse. When your children’s friends are getting piles of loot for celebrating a Christian holiday, how do you explain the beauty of your own religious traditions? Sure, Jewish kids get Chanukah presents and Santa, Frau Holle, Mother Berta, or other very Pagan beings do visit Pagan children, leaving small presents in their stockings or shoes, but how can it compare to the fiercely aggressive consumerism of Christmas?

From November to January, I cannot enter a store without being assaulted by the concept of “Love means you buy me things.” Yes, I know, you will say this isn’t the spirit of Christmas. You will say that it is about hope, goodwill, peace, family. From my perspective, you only pay lip service to these ideals. What you actually do is make it an ordeal for me to pick up a gallon of milk, or treat me like less of a friend because I didn’t give you something for a particular week in December. In practice, Christmas is saying that an entire year of generosity and goodwill is null and void if you don’t participate in the spending free-for-all. Now, a sinister new angle has been added: you have to spend to help the economy! Otherwise you’re not only a bad person, you are a bad American.

Christmas is war. It’s waged on every single reasonable person who thinks that this holiday of Light celebrated by so many faiths is a time to focus on spending time with your family and friends quietly at home. It’s a tool of guilt, shame, and unrelenting imposition on society.

Some Christians have begun to identify as Followers of Jesus instead. I wish more people would celebrate the Birth of Jesus rather than Christmas. It would certainly make life easier for the rest of us who just need to purchase our eggs and butter without participating in the free-for-all shopping cart derby.