The Culture of Life and the Children of Men

One of the Catholic Church's most debated teachings involves its opposition to contraception, even after a couple is married (a stance held by both Catholic and Protestant churches until the 1930s). Having read a number of articles about the reasons behind this teaching, it's still not an easy concept to grasp. But as I've often found, 'stories' -- fiction or non-fiction -- can clarify ideas much better than a sermon or article.

Such is the case with the P.D. James novel The Children of Men. Most people will be familiar with the title because it inspired a movie version that was released in 2006. While the movie was good (even better in certain ways than the book), it unfortunately ditched many of the book's Christian social themes. The Children of Men is not churchy, preachy, or hit-you-over-the-head Christian. Instead, P.D. James -- a devout Anglican -- manages to seamlessly integrate Christian ideas into the story in a way that non-believers might not even notice.

The story begins in the United Kingdom in the year 2021 during an era called "Omega." Humanity is on the road to extinction because the world has not recorded one single childbirth since 1995. Though scientists worked tirelessly to discover the cause behind this sudden lack of fertility, they remain clueless twenty-six years later. Hopelessness and madness have spread throughout England resulting in a jump in violence and lawlessness. Under the guise of security, the British government has become so tyrannical and all-intrusive in people's lives that law enforcement has achieved what one character calls "a refinement of cruelty." And since the government would want to control any woman who might miraculously give birth, they subject all healthy females to time-consuming forced examinations of their fertility every six months.

Theo Faron, the story's protagonist, is a man detached from loving relationships of any kind. He describes himself as having ensured "that there are no unexpected visitors in my self-sufficient life." When Theo is called on to protect the first woman in the world to become pregnant in twenty-six years, he undergoes a moral awakening that leads him down some dangerous paths.

The film version of The Children of Men emphasized what happens to societies when civil rights are suspended. The book, however, focuses just as much if not more on the "life" issues involved.

Recalling the evolution of the infertility problem, Theo says, "We thought that we knew the reasons -- that the fall was deliberate, a result of more liberal attitudes to birth control and abortion, the postponement of pregnancy by professional women, the wish of families for a higher standard of living . . . Most of us thought the fall was desirable, even necessary. We were polluting the planet with our numbers . . . When Omega came it came with dramatic suddenness and was received with incredulity."

Described in these terms, the story seems like an all too plausible scenario. In a society that has largely divorced sex from procreation, no one ever followed that attitude about reproductive choice to its logical if unlikely conclusion. Now, Omega has arrived and the despair is overwhelming.

There is a marked increase in suicides by middle-aged people who would "bear the brunt of an ageing and decaying society's humiliating but insistent needs." Also, every reminder of children (schools, toys, playgrounds) has been removed from the public landscape "except for the dolls, which have become for some half-demented women a substitute for children."

People's attitudes toward sex have also changed in an unexpected way. Theo says, "Sex has become among the least important of man's sensory pleasures. One might have imagined that with the fear of pregnancy permanently removed, and the unerotic paraphernalia of pills, rubber and ovulation arithmetic no longer necessary, sex would be freed for new and imaginative delights. The opposite has happened. Even those men and women who would normally have no wish to breed apparently need the assurance that they could have a child if they wished. Sex totally divorced from procreation has become almost meaninglessly acrobatic."

The lack of children has also resulted in an inability to feel romantic love in its fullest and most meaningful form. "We need the comfort of responsive flesh, of hand on hand, lip on lip. But we read the love poems of previous ages with a kind of wonder."

In a culture like ours where sex is often viewed as purely recreational, this fictional world gives us points to ponder. Maybe there's more truth to the church teaching on sex as "mutual self giving" than people realize. Perhaps a greater openness to children would be a good and beneficial idea for our society.

I've always thought that the church's moral rules were ultimately designed to keep individuals or societies from engaging in behaviors that would ultimately harm them. The problem is that the church doesn't always explain those rules in an understandable, relatable way. With that in mind, The Children of Men should be required reading for anyone interested in how "culture of life" issues can affect our world.

Franciscan University Responds to the Father Morrier Rape Indictment, And I...
Mary Pezzulo
3

Pastor Who Said the True Vaccine Was "Jesus Christ" Now Admits He Got His...
Hemant Mehta
4 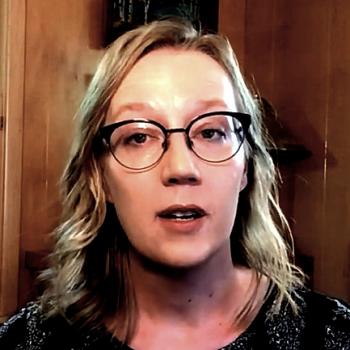 Separate reports expose harm done by abusive evangelical leaders
Barry Duke
Get Patheos Newsletters
Get the latest from Patheos by signing up for our newsletters. Try our 3 most popular, or select from our huge collection of unique and thought-provoking newsletters.
From time to time you will also receive Special Offers from our partners that help us make this content free for you. You can opt out of these offers at any time.
see our full list of newsletters
Editor's picks See all columnists