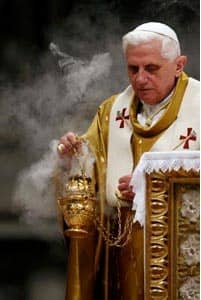 In case you missed the stories in the mainstream press -- but really, how could you -- during an interview with German writer Peter Seewald, Pope Benedict XVI made some comments about the use of condoms in AIDS prevention. Specifically, he used a hypothetical example in which a male prostitute using a condom might indicate within him a genuine concern for the welfare of the other person and a growing awareness that there is a moral dimension to sex. Said the pope:

There may be a basis in the case of some individuals, as perhaps when a male prostitute uses a condom, where this can be a first step in the direction of a moralization, a first assumption of responsibility, on the way toward recovering an awareness that not everything is allowed and that one cannot do whatever one wants. But it is not really the way to deal with the evil of HIV infection. That can really lie only in a humanization of sexuality.

Pope Benedict seems to be thinking like a novelist or screenwriter here, in getting into the mind of a person who is living a life steeped in sin, but who comes to experience a gradual moral awakening. It's a common story element in the works of authors like Flannery O'Connor or Graham Greene, and in some modern cinema.

For instance, in her novel Wise Blood, Flannery O’Connor creates the character of Hazel Motes, who rejects the Christianity of his grandfather and wants "to be converted to nothing instead of to evil." To pursue that goal and mock the beliefs of those around him, he founds the Church Without Christ "where the blind don't see and the lame don't walk and what's dead stays that way." The irony is that, in pursuing a life that opposes the existence and teachings of Christ, he is slowly moved closer toward Him. Though Motes' initial actions and intentions are misguided, grace is nevertheless moving his heart, mind, and will in the right direction. You could even say that he is sinning his way toward faith.

A more recent example that comes to mind is the Ivan Reitman movie Up in the Air, starring George Clooney. The story begins with Clooney’s character, Ryan Bingham, believing that love and human connections should be avoided at all costs because they're unnecessary burdens that hold one back from living a fun and accomplished life. As a result, he spends his days engaging in sexual relationships with lots of women, essentially focused on his own pleasure. Through the course of the film, however, Bingham unintentionally develops bonds with two very different women and discovers that his views become skewed; he begins to actually yearn for the sort of love and stability he has previously denounced.

While still willing to engage in sex outside of marriage, he no longer sees it as the meaningless, self-centered biological act, as he had. In that sense, Clooney's character is in the type of situation the pope is referring to in his example. He's still doing something wrong, but he's on the road to acknowledging that it is actually wrong and therefore, he is making progress. Again, a gradual moral awakening -- after a long and culturally-approved slumber -- is a positive move in the right direction. This is what Benedict is discussing.

The mainstream press generally misses this kind of nuance, as has been evidenced in their coverage of this latest story out of Rome. Unfortunately, it's par for the course in a culture that misses the nuance in most of the Church's teachings, especially when it comes to sex. Conventional wisdom says that the Catholic Church believes sex is dirty. The truth is that the Church teaches sex is sacred, not dirty, and that sacred things need to be treated with dignity and respect. Pope Benedict said as much during the interview with Seewald by explaining,

The sheer fixation on the condom implies a banalization of sexuality, which, after all, is precisely the dangerous source of the attitude of no longer seeing sexuality as the expression of love, but only a sort of drug that people administer to themselves. This is why the fight against the banalization of sexuality is also a part of the struggle to ensure that sexuality is treated as a positive value and to enable it to have a positive effect on the whole of man’s being.

That's the real message the pope wants to convey, and it is consistent with everything the church has said about sexuality in human life, yet the press treats it as the beginnings of the Church “changing its position on condoms.” It's a simplistic interpretation of a complex theme that should be addressed in a thoughtful, mature way.