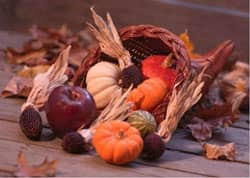 Setting people straight about Thanksgiving myths has become as much a part of the annual holiday as turkey, cranberry sauce, and pumpkin pie. But should historians bother? Jane Kamensky, a professor of history at Brandeis, asks on the website Common-Place (in 2001) whether it's worth while "to plumb the bottom of it all -- to determine, for example, ... whether Plymouth's ‘Pilgrims' were indeed the grave-robbing hypocrites that UAINE [United American Indians of New England] describes. ... Was the ‘first Thanksgiving' merely a pretext for bloodshed, enslavement, and displacement that would follow in later decades?' ... To ask whether this is true is to ask the wrong question. It's true to its purposes. ... And that's all it needs to be. For these holidays say much less about who we really were in some specific Then, than about who we want to be in an ever changing Now."

"And that's all it needs to be"? I disagree. I think that a historian approaching the question of Thanksgiving Day in the "ever changing Now" will need to ask "the wrong question" -- what of all this is true?

Surveying more than two hundred websites that "correct" our assumptions about Thanksgiving, it's possible to sort them into groups and themes, especially since Internet sites often parrot each other. Very few present anything like the myths that most claim to combat. Almost all the corrections are themselves incorrect or banal. With heavy self-importance and pathetic political posturing, they demonstrate quite unsurprisingly that what was once taught in grade school lacked scope, subtlety, and minority insight.

Commonly, the first point scored is that lots of people gave thanks before the Pilgrims did it in 1621. Local boosters in Virginia, Florida, and Texas promote their own colonists, who (like many people getting off a boat) gave thanks for setting foot again on dry land. Several sites claim that Indians had six thanksgivings every year; at least one says that every day, every act, every thought was carried out with thanksgiving by pre-contact Indians. (My thanksgiving is bigger than your thanksgiving?)

Many sites point out that only Edward Winslow's brief account records Plymouth Colony's 1621 harvest festivities, beyond which we have just William Bradford's seasonal comment that the Pilgrims ate turkey among other things. See, for example, Pilgrim Hall Museum's website.

Archaeologist James Deetz made much of the fact that Winslow did not name the turkeys Bradford mentioned. This startling revelation (that in this case one should ignore Bradford's general comments and suppose that Winslow was providing a complete menu listing) recurs in various websites, such as the 2002 article posted by the Christian Science Monitor.

More frequently repeated is Deetz's emphatic reminder that Winslow did not use the word "thanksgiving" -- drawing the conclusion that therefore the 1621 event was not a thanksgiving but some sort of traditional English harvest festival he characterized as "secular."

I've discussed this oversimplification previously in an article.  Deetz's assertion that there was no thanksgiving in 1621 is repeated at numerous websites. Often authors explain that what took place was so unlike later Puritan thanksgivings that it couldn't have been a true thanksgiving, usually citing, for the definition of what that would have been, William DeLoss Love, The Fast and Thanksgiving Days of New England(Boston, New York: Houghton and Mifflin, 1895), a book whose title alone seems to have inspired the common web article notion that in New England people fasted as an expression of thanksgiving.

In "Top 10 Myths About Thanksgiving," Rick Shenkman, editor of HNN, announces that Thanksgiving was not about religion. Had it been, he says, "the Pilgrims never would have invited the Indians to join them. Besides, the Pilgrims would never have tolerated festivities at a true religious event. Indeed, what we think of as Thanksgiving was really a harvest festival. Actual ‘Thanksgivings' were religious affairs; everybody spent the day praying. Incidentally, these Pilgrim Thanksgivings occurred at different times of the year, not just in November."