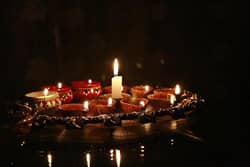 Diwali (sometimes called Divali or Dipvali) is an important Hindu festival celebrated all over India. Its name means “row of lights,” referring to the many oil lamps and lights that are lit at night to mark this holiday. These lights represent renewal and the hope of a new season, since Diwali occurs at the end of the rainy period and beginning of the harvest season. This usually falls around the end of October and the beginning of November.

In Indian terms, the festival begins on the thirteenth day of the lunar month of Ashvayuja and ends five days later, on the second of the lunar month of Kartikka. The holiday centers on the ending of one lunar month and the beginning of another because this entails darkness followed by the rise of a new moon. Families light sparkling clay lamps (diyas) and ignite firecrackers to create light and to ward off the darkness.

The exploding firecrackers are also meant to frighten away evil spirits. The goddess of prosperity, Lakshmi, is not frightened away but rather welcomed by the racket. The noise and light entice her to enter homes and to bestow her blessings for the following year. People offer the goddess gifts in return, such as jewels and money, special foods, and new clothing. They also distribute gifts to family and friends, as well as to public and domestic servants.

It is not certain how or when these rites were first established, but the festival seems to be over 1,000 years old. Several ancient Puranic myths are associated with it. One of these involves the triumph of the dwarf Vanama (an incarnation of Vishnu) over the demon king Bali. Vanama had asked the king to give him as much land as he could cover in three steps. After Bali agreed, he was astonished to see that the dwarf was able to step over the whole earth and the sky. The demon king had to grant Vanama his wish, but was himself forced to retreat to the underworld. Now, once a year during Diwali, Bali is allowed to leave the underworld and come above the earth to grant wealth to human beings.

The fourth day of Diwali is in fact devoted to the worship of Bali. The other days likewise have special functions: offerings to the god of death, Yama, on the second day; worship of Lakshmi on the third day; ritualized gambling and all-night partying on the fourth day (as well as worship of Bali); and commemoration of the relationship between brothers and sisters on the fifth day.

Many Indians associate Diwali with special recipes, such as “Wheat Laddu” (dried fruit coated with coconut and sugar), “Besan ki Barfi” (candies with almonds) and “Karanji” (cookies with coconut and dried fruit). These sweet treats are a reminder that Diwali symbolizes the sweet and the bright aspects of life.

Children often contribute to the festivities by molding small lamps (diyas) from clay or dough.

They insert a cotton wick and use ghee or oil for burning fuel. Diyas are also sometimes elaborately constructed by gifted artists and set on display in markets and showcases. Whether simple or sophisticated, the lamps are a ubiquitous part of Diwali throughout India. Besides candies and diyas, other popular traditions include playing cards, and decorating homes with candles, door hangers to welcome Lakshi, and festive wall hangings.

With an increasing number of Indian emigrants, the celebration of Diwali has become more prominent through the United States and parts of Europe. The U.S. Congress officially recognized the holiday in 2007.