Editors Note: The following is an excerpt from Mike Huckabee's: A Simple Christmas 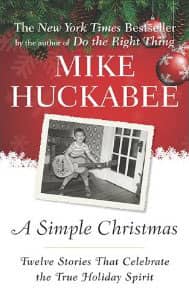 One of the toughest adjustments to make after Janet and I married was how to celebrate Christmas. It's difficult for every married couple; how do you combine the traditions of one family with the traditions of another? It might be easier to get Israel and the Palestinians to the peace table than to resolve some of the challenges of merging two very different family rituals into one harmonious Christmas experience.

Since my family traditions were the only ones I knew, I was pretty certain that they were the "right ones." The thought of doing Christmas differently was obviously blasphemous. If God had wanted us to have ambrosia instead of chocolate pie and crispy chocolate chip cookies as dessert, he would have written that somewhere in the Bible. The only reason explicit instructions about the chocolate pie and chocolate chip cookies were not in the Holy Writ was because everyone already knew that was the official Christmas dessert.

I did my best to hide my irritation that at Janet's house they couldn't start the Christmas dinner without ambrosia. I actually recall someone actually saying, "We can't have Christmas without the ambrosia." The heck we couldn't! I could have a lifetime of Christmases without it. I couldn't even spell it and didn't really know what it was, and when I finally learned I cared even less. As of this writing, I have been married almost thirty-six years, and I am proud to say that I have never once touched that ambrosia. I'm sure it tastes wonderful, and if it were Easter or Mother's Day, I might try it. But I have my principles!

Have you ever pondered that our traditions take on a heightened sense of certainty and become a part of the "right and wrong" way of the holiday? We tend to think that any of the activities that don't follow the script of what we're used to are not just different but wrong. Morally wrong!

I'm certain that Mary and Joseph missed having some familiar things around them the night Jesus was born. There was nothing to give them a sense of place or comfort. They were about as far removed from familiar things as they could be. Of course, they created the most important Christmas tradition themselves that night, since they were actually creating Christmas. They weren't thinking about pie or cookies, and they sure weren't thinking about ambrosia! That all sounds silly and childish when you think about what Christmas is really about, but I don't think it actually is. We establish traditions to give us connections to our past and a sense of security about the uncertainties of our future.

After both of my parents died, the idea of getting together on Christmas Eve the same old way seemed too much a painful reminder that they weren't there. So Janet and I started doing something totally different. We would attend our church's Christmas Eve service, and then my sister's family and ours would go out to eat Chinese food before gathering at our house for a brief time to observe Christmas. Now what on earth does Chinese food have to do with Christmas? Not a thing, but my dad loved Chinese food, and maybe it was our way of saying that the holiday is both a "sweet and sour" memory of the good times and the fact that our parents aren't with us anymore.

Now, having Chinese food on Christmas Eve after our church's special service is as much a tradition as it once was to cut down a cedar tree, make divinity, roast pecans, and watch our dad cuss when he put his finger into the empty light sockets.

Most of our traditions aren't elaborate ones. They don't have to be. They're special because they happen every year, not because they are expensive or complicated. And they make for a very wonderful but a very simple Christmas.