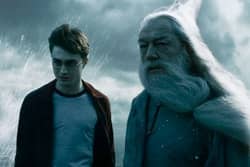 In late 2001, I was a latecomer to the Harry Potter craze. Sure, I had purchased the first book for my youngest brother so that he might read more, but I had never read them myself. After getting some overwhelmingly positive reviews on the first four books of the series from some trusted colleagues, I began the first book, and planned to read the four of them over a few weeks on my day off each Friday. I burned through the first one, and enjoyed it immensely, looking forward to the following week’s day off for the second. Early that next Saturday morning, when I finished it, I couldn’t resist, and began on the third book. Very early on the following Monday morning, I had to stop partway through the fourth book -- it was just so arresting! -- because I had to go to work. I was an addict, and there was no hope for me afterward.

I merrily stood in line starting in the late afternoon for both the fifth and sixth book releases, and then took them home immediately, cleared my schedule, and did nothing but read and take occasional breaks for food and the restroom (and minimal sleep) until I closed the books. On the sixth book’s wait, I and a few other Pagans in line, in order to pass the time in an appropriately themed activity, came up with a Harry Potter Tarot’s major arcana and the court-cards for the four minor arcana suits (based, of course, on the four houses of Hogwarts). Due to travel difficulties, I was not able to do the vigil at a bookstore for the seventh book, but I did obtain it and read it soon after the release. I’m utterly in favor of anything that gets kids and adults lined up for hours for a midnight release . . . of a book!

While I was not always happy with the excesses of Rowling’s writing (hundreds of pages could be shaved off each of the final three books without losing much, in my opinion), the stories themselves were compelling in their own way. I have enjoyed the films as well, often even more than the books, because there has been a need in the screenplays to cut the story down quite a bit in order for it to fit into a reasonable length, and in doing so, the stories have become much tighter and more coherent narratives. (That won’t be the case on the final two installments, with Rowling at the helm on the screenplays, but oh well.) While reading the books has been emotional for me quite often, the films actually made me weep unexpectedly at various points -- particularly anything involving flying (the hippogriff scene in the third film, for example) or Fawkes the phoenix; there is something deeply touching for me in these actions and characters, even if they seem rather minor in the overall panoply of Harry, Hermione, Ron, Hagrid, Dumbledore, Lupin, Snape, the Malfoys, Voldemort, and all the rest.

While some Pagans have been wary of the Christian veneer in the books, despite the ostensible “Pagan-ness” of a school of witchcraft and wizardry where mythological figures and references are as common as cars on the road are for us, I don’t see it as quite as problematic as many might. More than anything, the world of Harry Potter is steeped in British folklore and witchcraft; in that world of cunning craft and magical practice, Christianity plays a major role. It may not be an “orthodox” form of Christianity according to many Christians, but it draws on the myths and words of power, supernatural figures and spiritual techniques of that particular religion for some of the ideas and operations in its own folkloric stream.

What, really, is the harm in that? If the story of Jesus’ healing a blind man with mud and spit from the Gospel of Mark works as a basis for one’s magical working (and, phenomenologically, it is no different than any folk magical practice known the world over), why not use it? And, if the school terms of Hogwarts, based as they are on the Oxbridge trimester system (with breaks at Christmas and Easter) happen to work for the headmasters of Hogwarts, why not? One must admit, the way that Christmas is celebrated in the magical world of Harry Potter is neither the overtly religious version that many would prefer it to be, nor the overly secular version that most people end up participating in. Instead it is the kind of Christmas that puts emphasis on trees and lights and (thoughtful and useful, non-extravagant) presents, which are aspects that hearken back to Germanic and Roman observances of Yule and Saturnalia around Winter Solstice and the New Year.

And just because Harry “dies” and resurrects in the final book, in a sense, doesn’t mean it’s a Christian story, either; Osiris, Attis, and Dionysos were dying and being reborn long before anyone heard of Jesus of Nazareth. (Harry doesn’t really die, so much as have his horcrux-ness in relation to Voldemort removed . . . but that may be a technicality.)

About P. Sufenas Virius Lupus
P. Sufenas Virius Lupus is a metagender and a founding member of the Ekklesía Antínoou (a queer, Graeco-Roman-Egyptian syncretist reconstructionist polytheist religious group dedicated to Antinous, the deified lover of the Roman Emperor Hadrian and other related gods and divine figures). E is a contributing member of Neos Alexandria and a Celtic Reconstructionist pagan in the filidecht and gentlidecht traditions. Follow Lupus' work on the Aedicula Antinoi blog.