The Hindu Method to Save the Planet 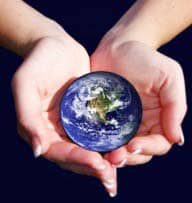 An eminent scholar recently came to our university campus and spoke about the role of diverse religious communities of the world and their attitude toward the environment. He showed examples from several indigenous communities from the North America, South America, and Asia. However, when he made a reference to Indian traditions and ecology, he used these words: "India has the most bizarre culture in the world where even a cobra is worshipped. This is a bit of an overshoot." What amazed me was that even in this supposedly globalized world that we live in, India continues to mystify scholars. While most Americans are familiar with the terms such as "yoga" and "Bollywood," Indian perspectives toward the ecology seem to be largely unknown.

It is true that cobras are worshipped by many Hindus, especially on a specific festival dedicated to them (just as there are specific festivals for mountains, rivers, cows, trees, and hundreds of other gods and goddesses throughout India). What is not commonly known is that Mahatma Gandhi had a brief encounter with a cobra at his ashram (retreat) once and he too did not want it to be killed by his colleagues. This is one of the shining examples of Indian environmentalism, not an "overshoot" as called by our scholar friend mentioned above.

Several scientific studies have pointed out that every being in nature is intrinsically valuable because every other being is directly or indirectly dependent on each other's survival; this is the fundamental motivation of scientists and environmentalists to save the biodiversity in every part of our planet. So, even a cobra has the right to survive. Moreover, other beings have an intrinsic duty to protect it as long as it is not a threat to them.

More than 2500 years ago in India, Mahavira and Buddha taught the same concept, although in a different framework of philosophy, spirituality, and ethics. Mahavira, the last great teacher of Jainism, even proclaimed that Ahimsa (Nonviolence) is the greatest Dharma (Dharma's meanings include religion, ethics, duty, virtue, righteousness, and cosmic law). Several Hindu and Buddhist texts also propound the same principle in different languages. According to most of these texts, Ahimsa improves one's karma. For observant Hindus, Jains, and Buddhists, hurting or harming another being damages one's karma and obstructs advancement toward moksha (liberation). To prevent the further accrual of bad karma, they are instructed to avoid activities associated with violence and to follow a vegetarian diet. They also oppose the institutionalized breeding and killing of animals, birds, and fish for human consumption.

Although yoga is widely known in the West, what is not so widely known is that yoga is a system of eight "limbs" or components. The very first step of the first limb of yoga is Ahimsa. Unless one is firmly rooted in Ahimsa in one's thoughts, speech, and actions, true practice of yoga cannot begin. And since Gandhi was a dedicated practitioner of Ahimsa (and other yogic principles), he can be called a great Yogi even though he might not have practiced all the stretching exercises that we commonly refer to as yoga. It is this practice of yoga that develops one's harmony with and reverence for nature in which even a cobra is not to be killed.

When I first mentioned this to my own students recently, one immediately questioned me and asked if Indians in India are not following the principles of Gandhi, how can we expect others? And I agreed with her. India (and many other emerging nations in the world) is enthusiastically aping the West with its ever-expanding economy and ever-shrinking natural resources. I was also asked recently at a conference on World Religions and Ecology, what do the non-Western countries expect of the Western countries? If the rest of the world is eager to make the same mistakes as the West did, what route should the West now take to ensure the planet's survival?

The simple answer would be to embrace Gandhi and his ecological practices. If the West is to remain the intellectual leader of the world, the quicker it reforms and transforms itself, the better for our planet.

While the West continues to crave more natural resources without changing its lifestyle, it will continue to lack the moral authority to preach to other cultures. It was the West who led the world with its modern scientific and technological innovations for the last several centuries. It will have to be the West who emerges as a new ecological leader, with Gandhi as the foundation of its lifestyle. All voices to save the planet's ecology are hollow rhetoric until that happens. On this birthday of Gandhi, which just passed on October 2nd, we hope to start this process with the Hindu and Jain immigrant communities in this country.

Several decades ago, in his non-violent movement for civil rights, Dr. Martin Luther King said, "Christ furnished the spirit and motivation, while Gandhi furnished the method." It is time again to go back to these cherished values propounded by Christ, Gandhi, and Dr. King: nonviolence not just toward other human beings but toward the entire earth. All three also practiced and preached an absolute simple lifestyle and it is time again to widely practice the same lifestyle.