This article originally ran in Sunstone (December 2004) and addresses the difficult problem of preaching the Gospel in Germany, to people who had lived through World War II. It is reprinted with permission. 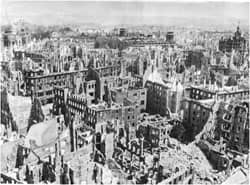 I have spent nearly six years in Germany, roughly a tithe of my expended life and, as we like to flatter tithing, surely among the best investments I have made. As a new missionary, I arrived in Hamburg in September of 1961, less than a month after the Wall had begun to go up. There would come a time when, speaking to students, I would have to identify which "wall" I meant, recount its history and relevance, but then and for three decades thereafter, no one needed a footnote when "The Wall" was mentioned. West Germany in 1961 was a showcase of postwar reconstruction, an "economic miracle" fueled by the Marshall Plan and showboating competition with the socialist East.

Hamburg, bombed to smoking chaos during the war, had re-emerged with a teaming business district, a state opera, subsidized theaters, art museums, an enormous university. There were two mass-transit rail systems -- one elevated, one subterranean -- a world-class harbor and soccer team. A fabled red-light district. A brand-new LDS stake center. My mission president saw my enthusiasm for Hamburg and sensibly sent me off to the far northwest corner of the country, as far away -- within mission boundaries -- as he could possibly send me. I went to Emden, a small harbor town just across the mouth of the Ems River from Holland. The people were East Fresians, related by blood and proximity to the Dutch. They were notoriously taciturn and skeptical and difficult just to talk to, let alone to convert. Their standard and surely favorite response to religious faith, if you could get them to respond at all, was a question. "Do you want to know what I believe?" they would ask and plod on in dialect. "I believe that a pound of meat makes a decent soup. And that's all." There was defiant satisfaction in this pronouncement.

As for church -- and virtually everyone, religious and not, was nominally Lutheran or Dutch Reformed -- the Fresians would explain there were three kinds of churchgoers. There were a few old women who ran to church every Sunday. The verb in this sentence was invariably "run." Then there were numerous reliable attenders who went faithfully to church every Christmas and Easter. And finally there were those church members, who, like the teller, generously saved wear and tear on the facilities by restricting the number of lifetime visits to four. They went to be christened, to be confirmed, to be married, and finally to appear at their own funerals. The speaker counted the visits off on his fingers, and after a canny pause, supplied the afterburner ending: "And for half of those visits, young man, we have to be carried in." The line was delivered with a satisfied, discussion-terminating smile.

If we could really get someone to talk to us, to be open and frank -- which was even rarer, particularly since we lacked the cultural leverage of springing for a beer -- he or she would surely recount horrific experiences from the war, then only sixteen years past and fresh on everyone's mind. They described things I could not even imagine. "If there were a God," the summation always began in resolutely subjunctive mode, "such things could not happen." We, in our turn, would try to explain what we did not then know was called "theodicy," the problem of evil. I had been in the military myself -- for six months -- in California. My companion and I were Mormon American missionaries with a special message. We were not conscientious objectors, but we were in favor of peace. We were respectively 19 and 20 years old.

Yet for all our naiveté and inexperience, we did have some success. There were occasionally baptisms, though not many. Later, when I'd entered the mission's traveling management corps, I helped do the numbers. We discovered that the 232 missionaries in the North German mission were averaging 1.6 baptisms over a two-and-a-half year term of service. That comes to .64 convert baptisms per missionary per year. And inasmuch as some fortunate elders baptized beyond average -- baptized families or even families and friends -- you can imagine that many, many others served full thirty-month missions and returned home without ever having baptized a soul. You can also imagine that the overall member growth rate was not staggering, perhaps not even measurable. Branches were most often small, lacking leadership, sapped by emigration to the U.S. In my first seven months, my senior companion and I presided over two branches ourselves, one in Emden and one thirty kilometers away in Norden, another small coastal city. Easily 90 percent of the members in both branches were women, mostly old women, just the sort -- you will remember -- who "run" every Sunday to church. We reminded ourselves often that the field was ripe and ready to harvest, and indeed in some periods before the war, Die Kirche Jesu Christi der Heiligen der Letzten Tage had grown rapidly. But by the early ‘60s, the mature crop so conspicuous in the past and in scripture was nowhere evident in the cobbled streets of northern Germany.