Yet another ten years later, thirty-eight after my first arrival in Germany, I traveled with my wife to the former Soviet Zone. I had a grant to teach for a year at a university on the Baltic not far from the Polish border. The university in Greifswald is small and medieval and was painfully neglected during forty years of Communist rule. Its new American Studies program was popular but very understaffed. There was plenty for me to do. The LDS branch in the city was fledgling. With only nine members and four missionaries, it was barely staffed at all. We found ourselves needed and welcome at both institutions and quickly found friends. Yet those friendships arrayed themselves across an enormous divide, one of class as well as conviction. It is said of young European Mormons that at high school graduation, they face a Rubicon decision: either to remain faithful to their church or to pursue a higher education. One cannot, it is commonly understood, do both. And this parting is not just about Mormonism. I often warned my German students that if they ignored religion altogether, if they bracketed it out of their studies and thinking, they would never understand the United States, not its history, not its culture or literature, and certainly not its politics. Still, they resisted. The aversion was almost physical. When I recommended a book to my best, most ambitious student, one who read everything I suggested, everything she could get her hands on, she looked at her feet, "That's the one you said was about religion."

She squirmed and kept her eyes on her toes. "I'd rather not."

What, I wondered, is the problem? Is it still the war, over half a century later, or is it forty years of Communist indoctrination?

"It's neither," a colleague finally explained. "And it's both. My friend, we like you very much. We are happy to have you here. But we have to shake our heads and forgive you your religion. To us, you are naive. When someone announces a plan of salvation, admonishes people to have and to live by faith, when this means obedience to some elect authority and requires commitment and sacrifice in this life for the sake of some better life to come -- I have to tell you quite literally that in this country, we've heard that all before, twice just in this century. And if those messiahs were secular, all those before them came on behalf of the Lord with the same kind of talk and the same kind of thinking. It was all lies. And it makes our skin crawl."

What does one say to so much lived history? How does a missionary approach someone so deeply and so reasonably wary? We had just shared a long meal and a long talk-filled evening of a kind rare among frenetic Americans. And we had done so in a home beautifully reclaimed through hard physical work and sublimely pragmatic invention from the dowdiness of Soviet construction. It had been the kind of evening in the kind of place with the kind of friends that sets a benchmark for quality of life. Yet in some welcoming worlds, as in some realms of terrible experience, clearly all prophets are false and unwanted. I asked myself then and ask now how useful it is to chafe over "stiffneckedness" in people so existentially scarred. Are they really being arrogant and unteachable? Or have they, instead, learned a hard lesson for which we have neither trained ears to hear nor schooled eyes to see.

One might, of course, avoid all such hand-wringing and simply be practical. Cost-benefit analysis may challenge the whole northern European missionary enterprise. From conversations with missionaries in Greifswald and elsewhere in Germany and Holland and Scandinavia, I surmise that conversion and baptismal rates are almost precisely where they were forty years ago. Dismal. Congregations persist but are mostly small, activity patchy. Given the high rates of conversion and growth in other parts of the world, South America, Africa, Micronesia, where demographic studies tell us the religion market is exploding, one might ask if the deployment of valuable missionary assets to a country so generally intolerant of religion is justified. Why bother?

Of course, my own commitment to Germany is personal and sentimental. I loved my mission years, my time as a student and then as a teacher, the branches I lived in, the members, the few people I helped convert, the one or two who are still active, my atheist students, and a number of wonderful, warm, actively irreligious friends. Beyond my personal investment, however, I think there is a larger, encompassing set of reasons to stay what seems an unproductive course. Mormons have had a missionary presence in Germany since 1852. According to Gilbert Scharffs's 1970 history [Mormonism in Germany (Salt Lake City: Deseret Book, 1970), ix], "more Germans [had then] joined The Church of Jesus Christ of Latter-day Saints than [had] the citizens of any [other] non-English speaking country." Even today, membership there persists at roughly 36,000 but has for decades been stagnant and tending toward decline. There have been some sporadic bursts of growth. There may be again. But even if this were never to happen, I see at least three good reasons for Mormonism to persist in a country and culture of unbelief.

Covenants in the Bible: The Concept of Covenant
B. J. Oropeza
3 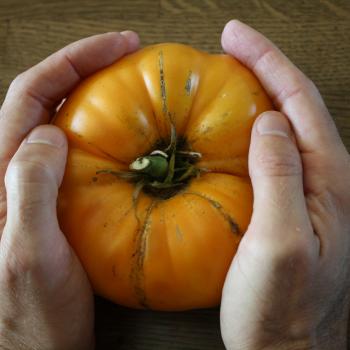 How to Wait
Brad Roth
4

The Problem of the Trump Rally and the Purple Maga Nuns
Mary Pezzulo
Get Patheos Newsletters
Get the latest from Patheos by signing up for our newsletters. Try our 3 most popular, or select from our huge collection of unique and thought-provoking newsletters.
From time to time you will also receive Special Offers from our partners that help us make this content free for you. You can opt out of these offers at any time.
see our full list of newsletters
Editor's picks See all columnists