The Language of God? The KJV Idiom

This is Part Two of a two-part article. Read Part One here. 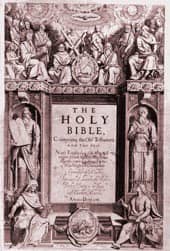 In Search of Scholarly Support
President Clark's misapprehension of the nature of Joseph Smith's revelations was unfortunate. Yet it was not on this but on scholarly grounds that he made his most elaborate case for the authorized text. He was modest and honest enough to preface his academic argument with the disclaimer that he was not a genuine biblical scholar. As he acknowledged, he knew no biblical language, had no formal training, and based his assessment entirely on secondary materials.

His use of these secondary sources was, however, prodigious. If his major concern with the revised Bibles was that they were laced with a modern humanism, his undergirding contention was that an ancient humanism -- the heresy of Arianism -- tainted the Greek text upon which the revisions rested. [The 4th-century Arian controversy was waged on sophisticated, highly nuanced metaphysical and ontological ground. As used by J. Reuben Clark, Arianism meant essentially that the humanity of Jesus was emphasized and his divinity minimized or lost.] In order to legitimate the doctrinally more acceptable King James Bible, President Clark championed the "Textus Receptus" (TR), the Byzantine-based Greek text from which the KJV had been translated. Those scholars who similarly supported the Byzantine text, Clark called "Sound" or "High" Textualists; those who did not, he pejoratively labeled "Extreme Textualists."

The details of modern textual criticism are complex and available elsewhere. But to understand Clark's academic reasoning, a brief account of the development of the New Testament texts behind the KJV and the revised versions is necessary.

Erasmus published the first Greek New Testament in 1516. His edition was based on only six manuscripts, dating from the 11th to the 15th centuries, and these in turn came essentially from a single tradition which, anciently, had several rivals. Thus, by modern standards, his edition was inadequate. In fact, for small parts of the New Testament where he lacked any Greek manuscripts, Erasmus simply translated the Latin Vulgate into what he conjectured the original might have been! One intriguing result is that there are no Greek manuscripts at all behind a dozen or so readings in the KJV.

Thirty years later, Robert Estienne (Stephanus) produced Greek editions following Erasmus in the text but using several additional manuscripts and introducing a critical apparatus to show alternate readings in the margins. His text was thus only a minimal improvement over Erasmus's. Theodore Beza enriched this tradition somewhat by publishing nine editions of the Greek New Testament between 1565 and 1604. Two of these influenced the King James translators. The resultant text became the Textus Receptus.

It is unfortunate that so influential a version as the King James was based on the TR, a text incorporating relatively few, relatively late, and relatively poor manuscripts. Not only had Beza and his predecessors ignored several earlier manuscripts than those they used, but for three centuries after 1611, additional manuscripts more ancient than those used by the King James scholars became available. A far more important development was the gradual recognition by scholars after 1725 that there were manuscript traditions or "families" -- not merely numerous manuscripts -- that differed from the TR. This insight led to continual improvement of textual classifications and allowed "lower" criticism to proceed on a more scientific basis, reaching a peak with the landmark work of Cambridge scholars B. F. Westcott and F. J. A. Hort, who in 1881-82 published The New Testament in the Original Greek.

Hort and Westcott positioned four major "families" of ancient texts. Of these, they said, the "Syrian," represented by the Byzantine tradition, was the latest and most corrupt. The least corrupt, or "neutral" tradition, was the "Alexandrian." This represented a direct challenge to the Byzantine-based King James Bible. The theory was bitterly attacked but won the support of most scholars and underlies virtually all subsequent work in New Testament criticism. As Raymond Brown observes, if the King James was a translation of the Textus Receptus, the RV and the subsequent RSV were heavily influenced by principles akin to those of the Westcott-Hort Greek Testament.

Because he believed that the revised versions undermined cherished Christian ideals, J. Reuben Clark turned the guns of his formidable mind against the Westcott-Hort text. He followed critics who protested that the Westcott-Hort construction was overly dependent on the Alexandrian text-type, particularly the famous codices (manuscript volumes), Sinaiticus and Vaticanus. He further followed those who alleged that these codices were not only 4th-century (that is, late) manuscripts, but that they represented a text-type that only originated in the 4th century, under heretical conditions, which is why the early church rejected them.