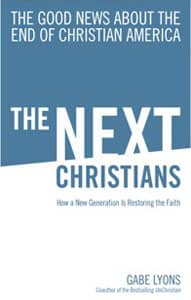 The red-lettered headline leapt off the black background of the April 4, 2009 Newsweek cover: "The Decline and Fall of Christian America." Based on sweeping new research, the story reported that the percentage of Americans claiming no religious identification has nearly doubled since 1990 and is now more evenly distributed across the United States. "While we remain a nation decisively shaped by religious faith," wrote Newsweek editor John Meacham, "our politics and our culture are, in the main, less influenced by movements and arguments of an explicitly Christian character than they were even five years ago."

To a growing group of believers, this change represents a new chapter in the story God is telling through His people. It's a welcome change from the out-of-control manipulations they've experienced when religion gets intertwined too closely with public life. They see it as a new opportunity to send the Gospel out in fresh and compelling ways.

Every generation must face this quandary, and in our changing world, the conversation has been resurrected again. How are today's Christians relating to culture? And is there a better alternative?

Separatism. In the past, some Christians fell into the separatist trap. They responded to culture with condemnation and retreat. Removing themselves far away from the corruption of culture is the name of their game. But Christians who remove themselves from the world in hopes of self-preservation fail to realize that true cultural separation is impossible. More importantly, separation ignores the task we've been given to carry the love of God forward to those who might need it most.

Antagonism. Some Christians see little in the current culture worth redeeming and have decided to fight against almost everything culture promotes. Offended by our current cultural disposition, they want to flip over the tables of society instead of negotiating the difficult terrain of working it out from within. By default, they are known for being great at pointing out the problems of society, but they rarely offer good or practical solutions and alternatives that promote a better way of life. They succeed in stating clearly what they are against, but their Achilles heel is suggesting alternatives that embody what they are for.

Relevance. Others have gone to the opposite extreme by falling into the "relevance trap." In my estimation, this is probably the larger threat for Christian leaders today. In an effort to appeal to outsiders, some Christians simply copy culture. They become a Xerox of what they perceive as hip in hopes that people will perceive them -- and their organizations, ministries, and churches -- as "cool" and give them a chance. Unfortunately, this pursuit of pop-culture removes the church from its historically prophetic position in society. Relating to the world by following the following the world is a recipe for disaster.

Countercultural. The next generation of Christians aren't separatists, antagonists, or striving to be "relevant." Instead, they are countercultural as they advance the common good in society. The next Christians see themselves as salt, preserving agents actively working for restoration in the middle of a decaying culture. They attach themselves to people and structures that are in danger of rotting while availing themselves to Christ's redeeming power to do work through them. They understand that by being restorers they fight against the cultural norms and often flow counter to the cultural tide. But they feel that, as Christians, they've been called to partner with God in restoring and renewing everything they see falling apart.

Paradoxically, in our current cultural context, this not only opens up more people to personal salvation, but it also sustains a God-glorifying testimony to the world of His restoration power at work. It's truly good news to the world. Rather than ﬁghting off culture to protect an insular Christian community, they are ﬁghting for the world to redeem it. This is the essence of being what pastor Tim Keller refers to as "a counterculture for the common good."

A commitment to being countercultural rather than being removed or "relevant" isn't always easy. Living differently can be hard. Going against the ebbs and ﬂows of culture can create friction and sometimes provoke a hostile reaction to the good we are trying to create. Theologians Stanley Hauerwas and Will Willimon remind us that this should be expected, for "whenever a people are bound together in loyalty to a story that includes something as strange as the Sermon on the Mount, we are put at odds with the world."

Yet, it is through maintaining this cultural orientation that the world can experience God's restoration power and people will be convinced that our faith is all we claim, all that Jesus commissioned his followers to. As the apostle Peter encourages, "Live such good lives among the pagans that, though they accuse you of doing wrong, they may see your deeds and glorify God on the day he visits us" (1 Pt. 2:12, TNIV).

Is a countercultural community the answer to restoring the soul of the world, winning the skeptics, and revitalizing our faith? We'll have to wait and see. For now we know that the clear call of Jesus is for the Christian community to be salt on a rotting world and light in the dimmest places.