An Omer's Value for Preaching 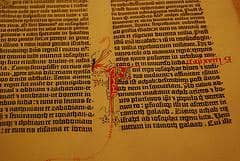 I’m guessing you didn’t have to memorize Exodus 16:36 when you were young. Perhaps it isn’t even on the tip of your tongue now. I understand, really, but I’ve been puzzling over the verse for some time now. Exodus 16:36: An omer is one tenth of an ephah. The word of the Lord . . .

I’m thinking we don’t need the verse. After all, the book is way, way too long anyway, so we might consider taking out some stuff to make it more manageable. And besides, scholars can't even agree on the size of an ephah, so what difference does it make that an omer is one tenth of it? You laugh, but in the Presbyterian Church we can actually do it. We can remove Exodus 16:36 from the Bible.

We are a confessional church, which is to say that we define our “theological playing field” through a series of confessional statements -- the Apostles’ Creed, the Heidelberg Catechism, the Westminster Confession of Faith, and so on. We take them pretty seriously. It takes a two-thirds vote of Presbyteries to change the Book of Confessions.

As it happens, the Westminster Confession of Faith lists the books that we believe make up the Bible. All I have to do is talk two-thirds of our Presbyteries into adding the line, "except Exodus 16:36" to Westminster and the verse is gone; it’s no longer holy writ. (Okay, so maybe the publishers won’t go along, but it won’t be in our Bible.)

I mean, how did Exodus 16:36 get there in the first place? I figure that a few hundred years after the Exodus story was first written, some copyist came along and realized that most people reading the text in his era didn't know what an omer was. And he cared enough to stick in a parenthetical remark so people would understand the Word of God. This is just one little story about the formation of our text.

Can you imagine the number of people involved in the development of our Holy Scriptures? First there were the early tribal storytellers. Next the “J” writer gathered and edited those stories in an effort to give the nation of Israel an identity -- an identity they needed if they were to join together and stand against a powerful enemy. But not just any identity would do. No, this identity was formed through an engagement with the God who moves from bondage to freedom, from chaos to creation. Their theological imagination was astounding.

After the northern and southern tribes split, the “E” writer took up the task of interpreting a new identity, but again they wrestled that out through an engagement with the same God. And let’s not imagine one writer here. Each of these “writers” represents an entire community along with generations of editors and interpreters, all in conversation seeking to understand and respond to this same God. Each writer describing that God using stories and images that they could understand.

Throughout the mercurial history of both the northern and southern tribes, other writers did their work, interpreting events in light of the same God, now revealed in these texts. Through defeat, exile, and restoration layer upon layer was added to the conversation until a rich tapestry of images emerged and were given authority by the community.

Then it happened. When these writings, this revelation of God, met a new cosmopolitan world view in the Roman Empire, their writings did not seem adequate to the task of revealing the same God. And at that moment new authors, new interpreters saw the same God revealed also in Jesus.

And so century after century, people have turned to these scriptures, adding their voice to the conversation, all of us pointing to the same God until you and I rise to the pulpit on Sunday morning to offer the next word. Each of us pointing to the same God in ways that our society can grasp. Each Sunday we stand and offer our attempt to let the Word of God be understood, just like that copyist so many centuries ago when he added what has now become verse 36. I think that’s pretty cool. We stand in a centuries long conversation animated by the Spirit of God.

Anyway, someday I’d love to send an overture to our General Assembly removing Exodus 16:36. I think the conversation about the nature of scripture would be healthy. But if it were ever to happen, if I were asked to vote to remove it? I’d turn it down in a heartbeat, for that little verse is like a window that lets me look into the nature of our work, and God’s revealed Word.

Rev. Sam Alexander is Pastor of First Presbyterian Church of San Rafael, California. He holds a B.A. from Sarah Lawrence College, and an M.Div. from Union Seminary in Virginia. Sam has served congregations in Maryland and in the San Francisco Bay area and serves as an Adjunct Instructor in Homiletics (Preaching) at San Francisco Theological Seminary. He blogs at www.gracecomesfirst.net.  Visit his Patheos Expert site here.