The Ordination at Dachau 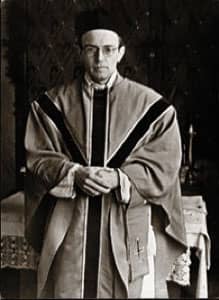 Some months back, I preached a homily on the "Priesterblock," the section of the Dachau concentration camp where priests were kept in isolation during World War II. Dozens of men were imprisoned there, kept apart from others, for one explicit purpose: the Nazis didn't want the clergy to give the people hope. Out of that experience, and a desire to better serve the needs of a war-ravaged world, came the seeds of the modern diaconate.

But what many may not know is that one of the men imprisoned there was a deacon. More remarkably, during his time there he was secretly ordained a priest -- to my knowledge, the only such ordination.

His name was Karl Leisner. The Wikipedia entry on him gives the bare outlines of his life:

He studied theology in Münster, where he founded illegal youth groups to resist the Nazis. With these groups he travelled to the Benelux countries to have camps outside of Nazi control. He was also named official diocesan youth leader by Bishop Clemens August von Galen in the same year. When forced to become a worker under the Third Reich, he organized Masses for himself and the other workers. His home and papers were searched by the Gestapo.

On March 25, 1939, Galen ordained him deacon. Due to his criticism of Adolf Hitler, Leisner was arrested on November 9, 1939, by the Gestapo while on a vacation in St. Blasien for his health. He was imprisoned in the Sachsenhausen concentration camp initially, but was moved to the Dachau concentration camp on December 14, 1941. (Most Catholic prisoners were kept in that camp.)

What the Wikipedia entry leaves out are his frail health, and the circumstances surrounding his eventual secret ordination. Leisner was diagnosed with tuberculosis, and in Dachau his condition began to deteriorate. Fearing that the great dream of his life -- to be a priest -- would never be realized, he and the priests in his cellblock secretly sent a petition to a local cardinal (aided here, and in so many areas, by a heroic nun known as the "Angel of Dachau," Sister Imma Mack.) The cardinal granted permission for a French bishop detained in the camp to perform the ordination, and asked Sister Imma to deliver a ritual book and chrism needed for the rite; Sister Imma was told to return these items, along with written documentation of the ordination, if they were able to celebrate it.

A number of prisoners, including some non-Catholics who worked in different work areas of the camp, made full sets of vestments for the bishop and Deacon Leisner. The ordination was celebrated in 1944 in secret, and the documentation was smuggled to Sister Imma, who then delivered it all to the cardinal. (The photograph here shows the newly ordained Fr. Leisner moments after his ordination. It is one of the few taken to capture this incredible event.) But Fr. Leisner's health was so weak, he was only able to celebrate mass, again in secret, once. Shortly after the camp was liberated, he was sent to a hospital for the terminally ill, where he died in the summer of 1945. He was 30 years old.

In 1996, Pope John Paul II declared Karl Leisner a martyr for the faith, and beatified him. His feast day is August 12, the date of his death. Blessed Karl Leisner's remains rest in the crypt of the Xanten Cathedral, in Germany.

As the Church remembers all her faithful departed this month, we need to remember in a special way extraordinary people like Karl Leisner. We are hearing again and again these days about how the Church is facing persecution in the Middle East, and how so many are giving their lives for what they believe. They are martyrs, just as surely as Blessed Karl Leisner was. And they remind us, too, that so much of what we take for granted today -- so much of what we practice and believe -- took root and grew and flourished because it was watered by the blood of martyrs. Their legacy is ours, and it traces its roots back to the first martyr, who gave his all on the hill of Golgotha.

He showed us The Way of sacrificial love, and countless have followed, including Blessed Karl Leisner.

Eternal rest grant unto them, O Lord, and let perpetual light shine upon them . . .