A Prayer for Jewish Food 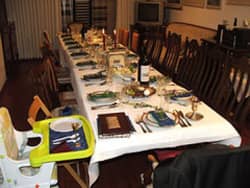 I'd been eating Jewish food all my life, but it took me years before I began to understand what makes Jewish food "Jewish."

The first time I gave the idea any thought, I was attending the seder of a French family who had taken to inviting me to their home for holidays and Shabbat. Like my own family, they were upper middle class and assimilated, but culturally Jewish. The grandmother, a woman well in her 80s, helped prepare the family recipes from Lorraine that were reserved for holidays. Seated in their Louis XVI dining room, the table lavished with delicate china, we dined on Jewish food cooked with a French flair.

First came the matzah and a charoset made from apples and nuts, but chopped more finely than my mother's. This was followed by an elegant chicken consommé garnished with matzah dumplings, an herbed veal roast and golden brown potatoes. We drank wine -- not the sweet Manischewitz, but savory French wine. For dessert there was sorbet and fruit with tiny French pastries that seemed a cross between a macaroon and a meringue.

The seder rituals themselves seemed exotic: Prayers were recited mostly in French or in accented Hebrew, making the Passover stories sound throatier and, to my ears, sexier than it usually did. It all seemed so familiar and yet so unusual. It was then that I realized that all over the world Jews were gathered around seder tables, reciting the story of the Exodus in Hebrew with different pronunciations and eating foods that they called "Jewish."

Until I went abroad, it had never occurred to me that the food in our home was unlike that of other Jewish families. On Friday nights we ate hallah and chicken soup and roast chicken. Our culinary traditions had traveled direct from the heart of Ashkenazi Europe, from my father's childhood in Augsburg, Germany and through my mother, born in New York to parents from Cracow and Galicia. My mother prepared her roast chicken with garlic salt using the recipe she had learned from her mother. But her matzah balls were straight out of the Settlement Cookbook, originally a pamphlet of 100 German-Jewish recipes written in 1901 by Lizzie Black Kander and published by the Milwaukee Jewish community for the benefit of the great wave of Jewish immigrants who swept into the United States at the turn of the century. My mother swore by it. "Didn't everyone use the Settlement Cookbook?" my mother, a sprite 92, still asks.

My favorite childhood dessert, plum kuchen, was made from my father's family recipe. It was a special treat eaten only on Rosh Hashanah when the Italian blue plums were in season. It was my job to carefully place the fruit slices one by one in a circle inside the meurbeteig butter crust. Baked, the plums turned black and juicy. My mouth still waters when I think of the tart fruit encased within that sweet crust. Years later, I learned that my beloved plum kuchen was in fact a Bavarian and Alsatian dish, not a Jewish one.

My French seder was the beginning of my Jewish food education. In my mid-20s, I moved to Jerusalem to work as foreign press officer for mayor Teddy Kollek. It was there that I tasted Aramaic kibbe soup at Malduch Restaurant near Mahane Yehuda and succumbed to the flavors of mouth-watering mimulaim, peppers stuffed with tomatoes, onions, lamb, cumin and cinnamon. My cleaning lady, from Morocco, introduced me to a coconut Cointreau torte that I still make every Passover. I also fell for Iraqi hamim, an ancient Babylonian chicken dish stuffed with rice and cooked for hours, as well as a Moroccan tagine with quince and lamb and a fragrant Persian stew made with walnuts and pomegranates.

While in Israel, friends and I spent a week with Bedouins in the Sinai Desert, where we experienced the barrenness of the land and the simplicity of the food. It occurred to me that the enormous slab of yeast-free flat bread, the roasted lamb (when the lamb was slaughtered, they marked their tent posts with its blood), and the bitter greens of early spring which they called marora, were the early Passover foods of the Hebrews, and that these foods, present at the birth of our people, had stayed with us throughout the millennia. As we wander from land to land, adapting to different terrains, governments and cultures, they connect us to Mount Sinai as well as set us apart from others.

Food, then, is part of what fastens us together as a people. It connects me, an American woman living in Washington, D.C., with Jews from all corners of the world, like the barely literate woman from the Atlas Mountains in North Africa who had immigrated to Beit Shean, Israel. Her kitchen, like the rest of her home, was simple, even austere. Every Wednesday she shopped and on Thursday the cooking began. On Friday she woke before dawn to craft loaves of Sabbath bread laced with sesame and anise seeds. She baked them in a taboon clay oven outdoors, just as she had in her native land. After the bread piled up, she started her chicken couscous, then prepared her eggplant, tomato, and lemon zucchini salads. She served these dishes -- in honor of Shabbat -- to her children who came to visit from all over Israel. For this woman, who could barely read, holiness was achieved through cooking for her family.