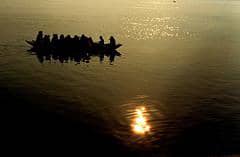 Hinduism contains numerous references to the worship of the divine in nature in its Vedas, Upanishads, Puranas, Sutras, and its other sacred texts. Millions of Hindus recite Sanskrit mantras daily to revere their rivers, mountains, trees, animals, and the earth. Although the Chipko (tree-hugging) Movement is the most widely known example of Hindu environmental leadership, there are examples of Hindu action for the environment that are centuries old.

Hinduism is a remarkably diverse religious and cultural phenomenon, with many local and regional manifestations. Within this universe of beliefs, several important themes emerge. The diverse theologies of Hinduism suggest that:

Gandhi exemplified many of these teachings, and his example continues to inspire contemporary social, religious, and environmental leaders in their efforts to protect the planet.

The following are ten important Hindu teachings on the environment:

1) Pancha Mahabhutas (the five great elements) create a web of life that is shown forth in the structure and interconnectedness of the cosmos and the human body. Hinduism teaches that the five great elements (space, air, fire, water, and earth) that constitute the environment are all derived from prakriti, the primal energy. Each of these elements has its own life and form; together the elements are interconnected and interdependent. The Upanishads explains the interdependence of these elements in relation to Brahman, the supreme reality, from which they arise: “From Brahman arises space, from space arises air, from air arises fire, from fire arises water, and from water arises earth.”

Hinduism recognizes that the human body is composed of and related to these five elements, and connects each of the elements to one of the five senses. The human nose is related to earth, tongue to water, eyes to fire, skin to air, and ears to space. This bond between our senses and the elements is the foundation of our human relationship with the natural world. For Hinduism, nature and the environment are not outside us, not alien or hostile to us. They are an inseparable part of our existence, and they constitute our very bodies.

2) Ishavasyam (divinity) is omnipresent and takes infinite forms. Hindu texts such as the Bhagavad Gita (7.19, 13.13) and the Bhagavad Purana (2.2.41, 2.2.45), contain many references to the omnipresence of the Supreme divinity -- including its presence throughout and within nature. Hindus worship and accept the presence of God in nature. For example, many Hindus think of India’s mighty rivers -- such as the Ganges -- as goddesses. In the Mahabharata, it is noted that the universe and every object in it has been created as an abode of the Supreme God meant for the benefit of all, implying that individual species should enjoy their role within a larger system, in relationship with other species.

In past centuries, Indian communities, like other traditional communities, did not have an understanding of “the environment” as separate from the other spheres of activity in their lives. A number of rural Hindu communities such as the Bishnois, Bhils, and Swadhyaya have maintained strong communal practices to protect local ecosystems such as forests and water sources. These communities carry out these conservation-oriented practices not as “environmental” acts but rather as expressions of dharma. When Bishnois are protecting animals and trees, when Swadhyayis are building Vrikshamandiras (tree temples) and Nirmal Nirs (water harvesting sites), and when Bhils are practicing their rituals in sacred groves, they are simply expressing their reverence for creation according to Hindu teachings, not “restoring the environment.” These traditional Indian groups do not see religion, ecology, and ethics as separate arenas of life. Instead, they understand it to be part of their dharma to treat creation with respect.