When Harry Met Hermione: A Review of Harry Potter 7:1

There's something almost magical about going to see a much-anticipated movie on opening weekend. I like to arrive a little early to find my seat and then watch and listen as the theater fills. People come in groups with their friends, chattering excitedly amongst themselves. They're happy. They're laughing. There's a sense of expectancy in the air that's more palpable than the aroma of hot, buttered popcorn.

Tonight was that kind of night, because tonight I went with a few friends to see the newest Harry Potter movie, Harry Potter and the Deathly Hallows, Part 1.

The Deathly Hallows is the seventh film in the epically popular series based on the even more epically popular books. This film is the first of a two-part conclusion to the saga, which will wrap up in July of 2011. I have a hunch the finale will be worth the wait.

The Harry Potter movies have made a habit of getting better and better with the release of each film. The Deathly Hallows is no exception. This is, in my opinion, the best of the films so far. It feels like a film with a high degree of confidence in its story, its characters, and its world. Like a well-practiced musician finger-picking his guitar strings on a stage, The Deathly Hallows feels effortlessly performed when in fact its skill has been earned through six films of hard work. Daniel Radcliffe, Emma Watson, and Rupert Grint are especially good, and they finally appear at home in their roles. It's a good thing they do, too, because they carry this film on their young shoulders.

The Deathly Hallows begins and runs without any exposition to remind the audience of what has happened before. Quick lines are included here and there concerning key plot points, but by and large the movie simply takes off and expects its audience to come along for the ride. In this episode, Harry, Hermione, and Ron set out to find and destroy the mysterious horcruxes that house bits of Voldemort's soul. They are on their own, and herein lies the film's strength.

As in the book, this exile of sorts that the three friends endure serves to further cement their friendship. In Harry and Hermione, we have an example of that rarest of narrative occurrences -- the wholly platonic male/female friendship. In almost all other movies, women and men are only allowed to be friends if one of the friends is homosexual or if one of the friends is romantically attached to someone else, and even then the man and women in question are usually not friends apart from their connection through the mutual friend/romantic partner. Harry and Hermione defy this convention. 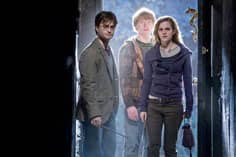 Perhaps it had to do with the company I was with -- two young ladies with whom I enjoy wonderful and purely platonic friendships -- but this was the aspect of the film that most struck me.

In our culture, men and women are simply not allowed to be friends. The broader culture assumes that something else must be going on behind closed doors. The culture of the church is often no better. We are so obsessed with marriage and sexual propriety that we rob ourselves of potentially life-changing friendships with half of humanity. It really is a shame.

The famed question of When Harry Met Sally is answered in When Harry Met Hermione. Yes, male-female friendships are possible. And, actually, the Bible commands them. We are told to treat other people, male and female alike, as siblings and parents "with absolute purity" (1 Tim. 5). In fact, working out the church's own logic, if we marry, we will each (presumably) marry one person. That means that every other person on the planet is and should be a potential friend.

Now, that's not to downplay attraction at all. Attraction may persist, but attraction, like any other impulse, can be disciplined, and to discipline is not to quell but to re-aim. Both of the young women with whom I went to the movie are attractive, but I can think them pretty and value our friendship and want no other kind of relationship. In fact, the better friends we become, the more of each of their beauty I see, and, in a sense, the more attractive they become, while I become ever more appreciative of our friendship.

The Deathly Hallows explores this tension through the relationships of Harry, Hermione, and Ron, and it gives a more hopeful and holistic picture of friendship than you will likely otherwise see.

And there's lots of magical explosions and potions that change people's appearances and giant snakes that make your skin crawl and lovable house elves and flying motorcycles and loads of laughs and thrills and tears.

It's a fun movie. I recommend seeing it with friends. Of both genders.