Why We Confuse Each Other: Mormons and Evangelicals 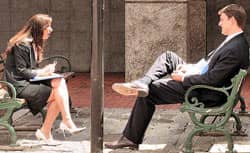 An old adage among outsiders who study Mormonism states that determining what is and is not Mormon doctrine is a lot like trying to nail Jell-O to a wall -- except that the latter feat is entirely possible while the former remains a struggle to this day. Evangelicals who interact with Mormons often express frustration to that end. It seems that as soon as we think we’ve figured out what Mormons believe and how to respond to it, the next Mormon we meet will tell us “we don’t believe that,” “that’s not doctrine,” or “that’s just his opinion.”

It would probably help if evangelicals spent more time genuinely trying to understand Mormonism and less time sizing it up for the best spot to throw a punch, but to some of us, the desire to understand is earnest and the frustration is genuine. Fair is fair: I do believe that there are some Mormons who only study evangelicalism for the purpose of looking for the best place to hang a target. They don’t have the grassroots organizational presence that evangelical anti-Mormons do, but they do exist. For my own part, I try to be an adherent of the interfaith dialogue philosophy of Krister Stendahl: If we’re going to compare, let’s compare your best with our best, though I sometimes fail in this goal.

On the other hand, the Mormon who wishes to understand evangelical Christianity takes up quite the task of her own. I’ll be the first to admit that we’re a large, unruly, confusing movement, and if you’re looking to me to sort things out for you, you’re already on the wrong track because so far I’ve had more education from Mormon scholars than evangelical Christian ones. I’m still trying to understand all that there is to us, which is part of why, last year, I began working on my master's degree at an evangelical seminary.

I do know enough to know that if you’re interested in us, you’re going to have to study and understand the following: Arminians v. Calvinists v. Open Theists, Credobaptists v. Paedobaptists, Complementarians v. Egalitarians, Charismatics v. Cessationists, Creationism (of the soul, not protological) v. Traducianism, Regula Fidei v. Sola Scriptura v. Solo Scriptura, and Justification v. Sanctification v. Glorification. If you’re really dedicated, you can add our various beliefs on protology and eschatology to your study, and those are just the basics. It won’t help that some evangelicals are a little bitter about these divides and will misrepresent the opposing positions when asked about it. As Douglas A. Sweeney put it in The American Evangelical Story, “In short, when viewed from the perspective of our multiplicity, we evangelicals hold hardly anything in common. We are a people more remarkable for our differences than our union” (p. 20)

However, there’s more to consider as we search for the wellspring of our mutual confusion. Evangelical Christianity is a movement whose estimated adherents number somewhere between 700 million and 812 million, depending on the definition. (See this post at Todd Wood’s “Heart Issues For LDS” blog for some discussion of this.) Mormonism’s boasted 14 million membership figure pales in comparison to those numbers, with Mormonism being about the size of a single Protestant denomination, say the United Methodist Church (12 million members) or the Southern Baptist Convention (16.2 million members).

Does the diversity and variety found throughout all of evangelical Christianity outdo Mormonism’s diversity and variety? Definitely. Does the diversity and variety found within a single Protestant denomination of comparable size outdo that of Mormonism? Unlikely, and there’s a good reason for that. A Mormon who begins to reject some of the positions being officially articulated by church leaders or desires to see change within the church is still going to believe that those leaders are God’s prophets who hold the keys to the priesthood, so he’ll probably stay in the church. A Southern Baptist who begins to disagree with some of the pronouncements and beliefs of her denomination will likely shift to another Baptist denomination more suited to her beliefs, or another form of Christianity altogether.

There’s a reason there isn’t a sprawling network of UMC or SBC bloggers discussing doctrine, analyzing the statements of leaders, and suggesting changes those denominations could make like there is with Mormonism and the Bloggernacle. In Protestantism, it’s more trouble to reform your own denomination than it is to simply move on to one that suits you better. In Mormonism, you have no where else to go.

This piece was first published at Timesandseasons.org and has been slightly updated. It is reprinted with permission.