The arrival of the holiday season can mean only one thing for classic film buffs everywhere: it is time to once again turn our attention to that most definitive and dualistic of Christmas films, Frank Capra's It's a Wonderful Life.

Released in 1946 amidst charges of unrealistic and excessive sentimentality, the film has become a Yuletide staple. Subsequent generations of movie-watchers have embraced the story's warmth and optimism while cultivating a growing appreciation for the dark clouds lurking behind Capra's trademark silver linings. With repeated viewings, it becomes clear that the Christmas Eve story unfolding in Bedford Falls is both more troubling, and more grace-filled, than post-war audiences initially thought—cozily reassuring, heart-warming and life-affirming, to be sure; yet also surprisingly and disconcertingly dark.

Anyone called to fight the seemingly-small-but-vitally-important battles of everyday life—in other words, everyone—can identify with George Bailey; the frustrations and sufferings that precipitate his despair strike frighteningly close to home. Capra's apparent lack of interest in visiting just retribution on Old Man Potter's head is deeply galling, and some worry whether George Bailey, even with a basket full of donated funds, will still face jail for Potter's malevolent theft. The fact that everything "works out" in the end is only partial consolation for the depths to which Bailey is allowed to sink before the angelic Clarence throws him a deeply improbable lifeline.

Yet despite the many insights the film's viewers have gained throughout the years, there is an intriguing ancillary question raised by Bailey's adventures that remains largely unexplored—one for which audiences should, perhaps, be most deeply grateful. This question, which delivers the final message of faith and hope as the perfect coda to the story of redemption, is a simple one: What happens to George Bailey after the credits roll? How, in the years following Clarence's intervention, does he look back on that wonderfully-unexpected Christmas Eve? Is he as grateful, a decade after his salvation, as he was that night, standing amidst his friends and family, fingering Zuzu's petals, and listening to the silvery tintinnabulations that signaled Clarence's final reward?

It's not a foolish or whimsical question. Ole' stick-in-the-mud George Bailey—who twenty-four hours earlier had stood upon a snow-covered bridge preparing to jump, completely unaware of his profound importance in the lives of his wife, children, and all those he held dear—is in a single, fantastical night, made miraculously aware of his true worth to sleepy little Bedford Falls. He is not a failure; he is indispensable!

But what human being could see himself as the single most important factor for good in the lives of all those around him, and remain unaffected? 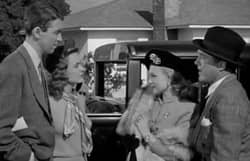 After that night, for example, what would George say to Mr. Gower, the town's pharmacist, if he happened to bump into him outside the old Savings and Loan? How would he feel, knowing that it was his childhood actions that prevented Gower from a lifetime of suffering, regret, and retribution for a single fatal, grief-stricken mistake? What might George be thinking as he chatted with his brother, Harry, knowing that Harry's heroism (indeed, his very existence) was only possible through George's quick thinking so many years before?

And what about greeting his lovely wife, Mary, each night, knowing that her lifetime as a frightened, bitter spinster was only avoided through his presence?

In the weeks, months, and years after that night, it seems all too possible that George Bailey's saving grace would slowly grow into his greatest temptation. Which among us could look upon ourselves in the decades following Clarence's "great gift," and avoid the terrifying clutches of pride and arrogance?

Surely there is a reason Capra's story ends when it does; these questions about the post-Clarence world of Bedford Falls are neither fair nor particularly germane to an understanding of the film itself. Asking a director "What happens after the curtain comes down?" is asking him to comment on matters that fall outside the scope of his original project. Neither Capra nor Philip Van Doren Stern, whose story, "The Greatest Gift," served as inspiration for the film, could (or should) be expected to have a ready-made answer for that sort of thought experiment.

Still, the line of questioning is an intriguing one, and one which Capra, who made the film to "combat a modern trend toward atheism," might well embrace. For it leads to a most interesting (and instructive) answer.

George Bailey is deeply and unavoidably human; like we all are. He is rough-hewn and faltering, resentful and imperfect, and it is difficult to imagine an "ordinary" man being granted such divine knowledge without being profoundly changed.