Bicycle Thieves and the Victory of our Fragility

For a father, there are few moments filled with more deeply conflicting emotions than when he holds his newborn child for the first time. To that tiny little infant, mewing and squirming in his arms, he is the ultimate, a godlike power. In the coming years, this child will trust him absolutely, love him unreservedly, and rely on him completely for everything it needs. Yet at that same moment, rejoicing over this new, priceless life that has been given to him for safekeeping, the father knows all too well that he is not God, and that he never can be—that a time will come when the child realizes his father's limitations; when the child is hurt and damaged by the father's selfishness and lack of affection; when the fragile, inestimable trust he holds as gently in his hands as this newborn babe will be broken. Sadly, fallen human nature will invade this seemingly perfect scene, tainting it with harsh realities. And this precious moment, a microcosm of the extraordinary bond between father and child, will be lost forever.

It is exactly this moment—when fathers become human—that is examined with remarkable clarity and insight in Vittorio De Sica's 1948 classic, Bicycle Thieves (Ladri di biciclette). A defining entry in the cinematic genre of Italian neo-realism, it has been justly praised for its extraordinary verisimilitude, its emotional power, and the force of its sociopolitical criticisms. Yet to label the film's political and social admonitions as its ultimate message is to miss its subtler, more penetrating observations on the painfully rewarding dynamic between father and child—a dynamic which has rarely been shown with such terrifying accuracy or such hope.

De Sica's film tells the story of Antonio Ricci, a young Italian father struggling to support his family in the devastated economic wasteland of post-war Italy. After being hired to serve as a poster-hanger, Antonio convinces his wife to pawn away the last of their wedding gifts so that he can buy a bicycle—an essential tool in the accomplishment of his newfound employment. Hours after beginning this precious work, however, his bicycle is stolen away by a young man as desperate as he, and Antonio's position deteriorates to one of even greater severity than before. Accompanied by Bruno, his young son, he takes to the streets of Rome in an ill-fated attempt to track down his assailant and reclaim his stolen property.

Many fruitless hours later, exhausted and increasingly despairing, Antonio begins to take his frustrations out upon young Bruno, who is confused and hurt by his father's unfair attacks. Then, providentially, they happen upon the very man they have been seeking for so long, but their victory is short-lived as their excitement turns all too quickly to anguish. The thief, backed by his friends and family, refuses to admit his guilt, and the paralyzing disinterest of the policeman Bruno summons puts an end to any expectations Antonio might have had for a successful resolution to the chase. Their hopes dashed, father and son begin the long trek home. Along the way, they pass a football stadium surrounded by thousands of riderless bicycles. Antonio, confronted by this seemingly-painless solution to the overwhelming problem of supporting his family, succumbs to the temptation. As his son looks on in horror, he steals one of the unattended bicycles.

He is apprehended almost immediately, and is only spared from the vengeance of the spectators by the actions of his son, who charges into the angry group in an impassioned, tearful effort to rescue his father. The mob of onlookers, ashamed by the boy's obvious distress, chooses to release Antonio, dismissing him with a stinging rebuke: "Nice thing you're teaching your son."

Ashamed and irretrievably damaged in his son's eyes, Antonio stumbles away, a broken, defeated man. His son follows behind, rubbing at his tear-stained face with a grubby handkerchief. Slowly, sorrowfully, they make their way down the street, but as Bruno catches up to his father, he reaches up and quietly takes Antonio's hand. Too overwhelmed to fully appreciate the magnanimity of his son's gesture, Antonio grasps Bruno to him more and more tightly as they vanish into the surging crowds around them.

That small yet all-important gesture lies at the very heart of the transformation that takes place between father and son, brought about by their shared sufferings and trials during that day in Rome. Bruno is clearly shocked and horrified by his father's actions, yet his willingness to provide comfort and support in spite of his father's clear betrayal is a sign that he not only recognizes Antonio's failings, but understands and forgives him for them. And while the film ends on an undeniably somber note when considering Antonio's efforts to support his family, its view on the future relationship between he and Bruno is much more optimistic.

"May the Lord Make Us Truly Grateful"
Jonathan MS Pearce
2 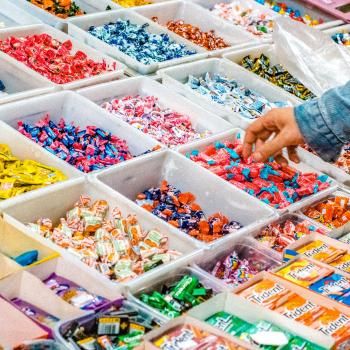 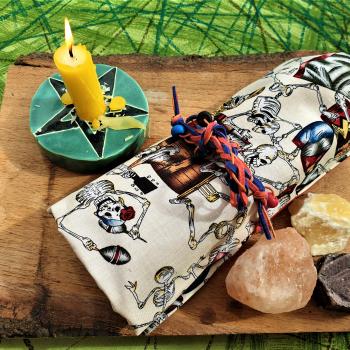 Salvation by Works in the Catholic Catechism?
Dave Armstrong
Get Patheos Newsletters
Get the latest from Patheos by signing up for our newsletters. Try our 3 most popular, or select from our huge collection of unique and thought-provoking newsletters.
From time to time you will also receive Special Offers from our partners that help us make this content free for you. You can opt out of these offers at any time.
see our full list of newsletters
Editor's picks See all columnists