On Chanukah and Extremism 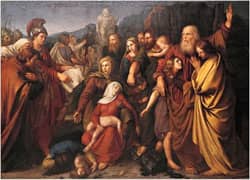 When I was a kid I loved Chanukah. Every one of those eight nights my family lit a tableful of menorahs, which is about as safe as it sounds. We opened the blinds and let the light shine out onto the sidewalk. We hung out with friends, opening presents and playing or watching the candles die down. And we sang.

There are beautiful Chanukah songs, with melodies by Handel or stirring words about justice and freedom. There are traditional psalms like Al Hanisim. "Eight Days of Chanukah," a childhood favorite, is none of these. Not to be confused with Senator Orrin Hatch's release of the same title, "Eight Days of Chanukah" is an obscure track off of a Chanukah CD my parents bought when my brothers and I were little, ostensibly set to the tune of a Russian-folk song.

"Eight Days" tells what I took as a kid to be the Chanukah narrative: (1) The glory days of the ancient Temple are threatened by the tyrannical Syrian Greeks; (2) The Maccabees successfully drive the tyrant Antiochus from the land; (3) The Maccabees rededicate the Temple, thanks to a lone jar of oil which miraculously keeps the Temple flame burning for eight days and nights.

Even as a child, I knew that Chanukah is a post-biblical, religiously unimportant holiday, and that the part about the miraculous oil was added later, possibly to remedy God's conspicuous absence from the story. But I understood Chanukah to be about Jewish resistance to oppression, a righteous rebellion against a powerful enemy that confirmed the strength of the Jewish people and our right to a national existence. In "Eight Days," we sang: "those days in history, still live for you and me, let's keep the flame forever shining bright." The Maccabees made us proud, and not just in an Adam Sandler, let's-list-famous-Jews kind of way.

This message jibed with what I was hearing in school, in youth groups, at camp, and at synagogue about Israel, the strong Jewish nation that again and again defeated larger foes in the face of an existential threat. Even the dreidel pitched in. One of its faces, I learned, changes in Israel to account for a more locationally accurate four-word acronym: A great miracle happened here.

I learned only later that the story doesn't end happily with a miracle.

The true story of Chanukah does begin with rebellion against an oppressive empire's anti-religious edicts, culminating in the reconstitution of the ancient Jewish state. But Act Two, the Maccabees in Government, is a military and political tragedy, a story, in David Brooks' words, of "tragic irony, complexity and unattractive choices." The larger story reads, in retrospect, like an ill-fated anticolonial struggle: Fundamentalist freedom fighters (backed by foreign powers) wage an insurgent campaign, oust the occupiers, and achieve self-determination. Left in the colonizer's wake: internal cleansing campaigns against Hellenized political and cultural rivals (e.g., Jews named Jason), and ultimately a corrupt and authoritarian Hasmonean theocracy. Once the Maccabees are in power, it becomes hard to see who the good guys are.

I am not saying, as Christopher Hitchens nearly did, that the Maccabees are the Taliban, nor am I suggesting that commemorating their victory is akin to celebrating that of the Afghanistan Mujaheddin over the USSR. I just think I should have been taught what happened after the righteous revolt, after the oil burned for eight nights; I should have been told about the Jew-on-Jew persecution, for example, and the steady slide into a theocratic failed-state which was easy pickings for the Romans a century later.

The Rabbis created a nice midrash about God's approval of the Maccabean rebellion itself, but Act Two is hard to interpret as anything but bad karma. Maybe that's why those rabbis avoided it. But the cautionary tale about mixing power and extremism seems right for our times, and worth remembering this Chanukah.