Dinosaurs, St. Nicholas, and the Mystery of God 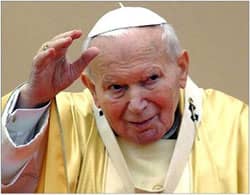 Children are, by their own nature, a kind of mystery.  I have eight of them, so I know this pretty well.  The mystery begins as soon as the first symptoms of nausea and coffee-aversion indicate I am carrying new life: who am I carrying?  What will the baby look like? Whose side of the family will she take after?  Will this child, finally, be able to find his own shoes by the time he is a teenager?

My son, Nicholas, who has autism, is a sweet and loving little boy. He is chronologically 8 years old but developmentally about 4 or 5 years old.  Some things he seems to grasp very quickly; other things are hard and slow in coming to him.

At this time, he is struggling to make sense out of the world around him.  He questions me, "Are dinosaurs real?"  We've seen their bones (we have a small collection of bones and dino coprolites, too) but he knows they aren't here on earth anymore and that no people have ever seen one alive, so they are not pretend, but not ‘real' either.  I have a book of photographs of modern Saints, like St. Thérèse or St. John Bosco, so he knows they are real. But they have died, so he is concerned if they are real?  He often stares with his big, brown eyes, and I wonder just what he sees or is pondering in there when I try to give him an answer.

And then, "Is Nicholas real?" he often asks me, and in doing so often reaches out gently to touch my face under my chin, to turn my face down from whatever I am busy doing to look into his.  I've been told that the reason children with autism prefer tight clothing and weighted blankets is because they often cannot sense where they are in space -- they ‘lose' themselves or the sense of their own bodies.  Does he feel ‘real' when he loses his sense of his own body?  When he asks me this, I hug him tight, so he can feel himself with my arms around him, and let him know that, yes, he is real.

In some ways, our Catholic faith is helpful in teaching about spiritual matters because so much of it engages the senses. There are many ways within the practice of the Faith to make it ‘real': singing, candles, incense, kneeling and praying both silently and aloud, icons and statues and seasons, and feasts to help us remember who we are and why we do the things we do.

Recently, we were preparing for St. Nicholas Day, December 6.  Nicholas loves his name-saint; he knows some of his story and can identify him in icons; he always asks St. Nicholas to pray for us after we say grace at dinnertime.  As we prepared for St. Nicholas day this year, I told him again the story of St. Nicholas helping poor people by giving them money or clothes or food, and that he never told anyone about his good deeds; he did his good works in secret, just for God to know.  We talked about how he was a good friend to children.  We looked at his favorite Holy Card, and his little pewter statue of St. Nicholas that our Nicholas lovingly places in the manger next to baby Jesus (because he is Jesus' friend, after all).

We have a small Advent tree, decorated with white lights, pink ribbon, and Jesse Tree ornaments, and an Advent wreath next to it in our dining room.  I told him that he should put his shoe under the tree and see if any gifts for St. Nicholas Day were left for him inside.  After they were all asleep, I put in the shoe a small chocolate St. Nicholas, two candy canes (representing his bishop's crosier) and a small tangerine -- because we Christians are called to bear good fruit.  And I hung candy canes on our little Advent Tree, as much because we love to eat them as because I thought it would be fun to wake up to such a sweet sight on the sparsely decorated tree.

The next morning, we were awakened by our youngest son, Jonathan, yelling, "Nicholas! Come and see what St. Nicholas put in your shoe! Look!  Come and see!"  Jonathan was just itching to get into the contents of the shoe.

Well, my dear Nicholas just stared very hard at his shoe.  He didn't touch the shoe, or any of its contents; he didn't say a thing, just stared, taking it in.  Jonathan was over the moon, believing without being told that St. Nicholas brought him some little things but our young Nicholas wasn't saying anything. Just quiet private thoughts, and a gentle little smile.  I wondered if he was thinking, "Is this real?"  I guess sometimes silent pondering is the only way to handle a mystery.

I have spent a lot of time wondering why he has never asked me if God was real, and I have spent most of that wondering trying to decide how I would handle that when we got to it.  He seems quite content that Jesus is both the baby in the manger and the dead man on the Cross, and he is not dead anymore because God the Father made Him alive again.  He never questions that Jesus can hear us when we say that we love Him when we pray.  But wasn't it only a matter of time before he uttered the one question I had no real concrete reply for? And yet the question never came.  And I finally learned why.