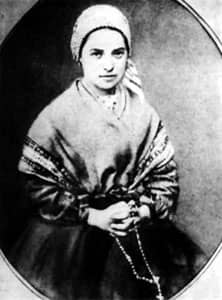 On a Friday evening during my first year as a Jesuit novice I wandered into the TV room to see what video was being served up. Television watching was a popular pastime for novices still on a $35.00 monthly stipend. In typical Jesuit style, our TV room consisted of fifteen individual recliners lined up in front of a large television, an admittedly strange setup that once prompted my brother-in-law to ask if we took a vow against sofas, too. "What's on?" I said.

"The Song of Bernadette," said one, glancing up from the TV.

"What's it about?" I asked. Everyone else looked up from their chairs, apparently aghast.

I shook my head dumbly.

One thing I realized soon after joining the Jesuits was how little Catholic culture I had grown up with, or at least absorbed. While the other novices were raised in families that went to daily Mass, attended novenas, said grace at meals, and knew the difference between the Immaculate Heart and the Sacred Heart, I was still trying to remember how many sacraments there were. (Seven, by the way.)

My ignorance extended not only to weightier theological matters but also to pop culture. In the space of a few months I had already been teased for not having seen Going My Way, The Nun's Story, and The Trouble with Angels and I feared that this was another instance of not knowing about a movie that everyone else had seen when they were ten years old.

"Sit down," he said. "You can't say that you're Catholic and not have seen this movie."

Based on the bestselling novel of the same name, The Song of Bernadette tells the story of the events that occurred in the small French town of Lourdes in the latter part of the 19th century. Starring Jennifer Jones as Bernadette and Charles Bickford as her initially doubtful but eventually supportive pastor, the movie is a perennial Catholic favorite. But The Song of Bernadette stints a bit on the actual events, and as moving as the film is, the real story is even more so.

In 1858, Bernadette Soubirous, age 14, was living in appalling poverty. Her father's milling business had recently failed and, desperate for lodgings, the family took up residence in a room that until recently served as the local jail. In this cramped hovel, no more than ten-by-ten feet square, lived Bernadette's parents and their four children.

On February 11, Bernadette went with her sister, Toinette, and a friend to fetch some firewood for her mother. The family's poverty prevented her mother from buying wood in the town. Only a few months prior, Bernadette had returned to her family after working as shepherdess in a nearby town to earn a little money.

Her destination was a grotto on the outskirts of Lourdes at a place called Massabieille (the name means "old rock" in the local patois) on the banks of the fast-flowing Gave River. In her superb study of the apparitions and their consequences, Lourdes, the Oxford historian Ruth Harris reminds readers of the unappealing state of the now-famous grotto. From as early as the 17th century, the town's pigs came to forage at Massabieille, and eventually took up residence there. Far from the well-tended and even manicured place that contemporary pilgrims know, the original site was "a marginal and even filthy place."

While the two other girls crossed the river to gather wood from the other bank, Bernadette, a sickly and asthmatic child, lingered. Eventually, she began removing her stockings, to prepare to wade into the river and join them. As she did so, she heard the sound of a wind, though she saw nothing moving around her. Bending down to remove her other stocking, she looked up again. This time, the wind swayed a small rose bush in the niche of the grotto, and a "gentle light" emanated from the spot. In that light she reported seeing a young girl, dressed in white, smiling at her. (Later representations, including those in The Song of Bernadette, typically misrepresent Bernadette's testimony by depicting the vision as a mature woman.)

Frightened, Bernadette took a rosary from her pocket and tried to make the sign of the cross. Fear got the better of her and she found herself unable to do so. But when the young girl made the sign of the cross, Bernadette did the same, and began to pray. "When I finished my rosary," said Bernadette, "she signed for me to approach, but I did not dare. Then she disappeared, just like that."

This would be the first of several apparitions that Bernadette reported. Like the rest of them, no one with her had heard, seen, or experienced anything.

On the way home, Bernadette told her sister what she had seen, swearing her to secrecy. But upon entering their house Toinette burst out with the news to her mother: "Bernadette saw a white girl in the Grotto at Massabieille!" Her parents, furious at their daughter's lies, beat her, and forbade her to return.