Editor's Note: The first installment in this series introduced the question of whether Jesus Christ was an actual historical person or a mythological fabrication, and discussed the allegation that there is no independent (non-Christian) verification of the existence of Jesus. The second part examines the claim—an increasingly common claim amongst atheists today—that the Jesus story is actually a pastiche composed of bits and pieces of ancient pagan myths. 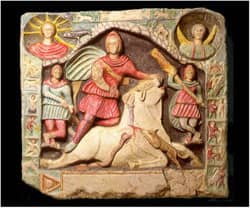 Pagan similarities
Allegations that Christianity is an adaptation of a pagan cult date from the 19th century. In 1875, Kersey Graves wrote The World's Sixteen Crucified Saviours, a book so poor that even the Internet Infidels admit (in rather more diplomatic language) that it is a load of old cobblers. The idea that myths can be fitted into an overall pattern was given rather more credibility by Sir James Frazer in the early 20th century, but his work is now also disregarded by anthropologists. In 1936, Lord Raglan published The Hero: A Study in Myth, Tradition and Dreams, which included a list of attributes that heroic figures of legend are supposed to share. The list often turns up on the internet with claims that Jesus fits the pattern very well. The only problem is that he does not fit the pattern at all, and the case of Raglan's list has been thoroughly debunked.

More recently, the tradition was carried on in The Jesus Mysteries (1999) by Peter Gandy and Timothy Freke, and Tom Harpur in The Pagan Christ (2004). These amateur historians play fast and loose with the facts, using carefully pruned quotations, mistranslation, and anachronism to produce a woefully inaccurate picture. But only by doing this can they maintain their thesis that Jesus is based on pagan antecedents.

The usual method of writers such as these is to read (or, more accurately, misread) some fragment of ancient mythology and claim that there are parallels to be found with the life of Jesus. With this in mind I present James Hannam's Guide to the Production of a Bestseller that Undermines the Roots of Christianity. With this guide, I guarantee that you will be able to find all the parallels you like between paganism and Christianity—or indeed, properly adapted, between any other two unrelated subjects that you care to name.

1)   The first thing to do is ensure you that you cast your net as widely as possible. So, within Christianity you should include every cult, heresy, and sect you can get your hands on. Gnosticism will be particularly helpful as gnostics did indeed borrow large chunks of pagan thought, which is partly why they were considered heretics in the first place. As for paganism, this can include just about everything. Freke and Gandy comb not only Greek cults (Oedipus) but also Egyptian (Horus and Osiris), Roman (Bacchus), and Persian (Mithras). Elsewhere you will find Celtic deities, Norse berserkers, and Indian mystics pulled into the fray. Tom Harpur is a particular fan of Egyptian myth. Now, with this vast body of writing, provided you are willing to wade through it all, finding parallels will not prove too challenging.

2)   Don't restrict yourselves to pagan religions from before the time of Christ. Remember, you can claim that Christians copied pagans, and not the other way around, even when the Christian writing is more ancient than the pagan. This is useful because you can now point to similarities between paganism and Christianity after the latter was already widespread. For instance, there is a poem with a line about the Norse god Odin being attached to the world tree ("I know that I hung on a windy tree, nine long nights, wounded with a spear"). Sounds like Jesus being nailed to the cross? Well, not really, and in any case the Norse myth was written down well after the Vikings converted to Christianity. Don't let that stop you.

3)   Language is important. Christian terms such as 'salvation', 'Eucharist', 'word made flesh,' and 'lamb of god' are common currency today. Therefore, when translating or paraphrasing pagan sources, always use familiar Christian language. Never mind that the ancient pagans would not have known what you were going on about; you are not talking to them. In this way, you can call a woman being raped by various kinds of wildlife a 'virgin birth' (such as Europa being raped by Zeus in the form of a bull); you can call the reassembly of body parts a 'resurrection' (such as Osiris being pieced back together by Isis); and you can call just about every Greek hero a 'son of god' (because, let's face it, the Greek gods were a lecherous bunch and so had a good few kids). Also, it is helpful to use King James Bible phrases and style when quoting pagan texts. It gives them some more gravitas.