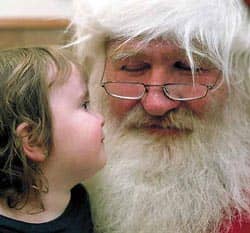 I remember being snug in my bed all a-twitter, listening for reindeer and the tinkling of sleigh bells. When you are 4 years old, the world is a magical place and your faith in the unseen is as simple and pure as new-fallen snow. Year after year, my supplications were answered, my stocking filled, and my faith in Santa Claus rewarded. More fervently than any Sunday at church, I believed in Santa, far longer than my friends who had adopted a worldly-wise cynicism. As if debating theology we would argue his existence, for though his cultic symbols and priests surrounded us every year, the object of adoration and obedience was mysteriously absent. None of us had ever actually seen Santa Claus in person.

Years later, as a Pagan adult, I realized that Santa Claus was the first God I ever loved and served. It wasn't just about the presents. It was the mythos and the mystery. It was the idea that this fantastical figure knew who I was, the good and the bad of me, was interested in my dreams and desires, and, even more miraculously, delivered on his promises. True, sometimes he gave me socks instead of a drum, but then isn't that the job of a God to give what you truly need and not just what you want?

Santa never policed my thoughts or probed my heart. Though I may have considered putting makeup on my brother in his sleep, I did not, and it was my right actions that Santa required and rewarded. It was so much simpler than the Christian faith, where simply longing for my cousin's bicycle was a sin. I was a practicing Pagan long before I knew what the word meant when I hung my stocking with care.

As an adult I still believe in Santa. No, I don't expect a jolly man in a red suit to come down my chimney any more than I expect Zeus to pop in for a cup of coffee. I do believe that there is a God who loves and cares for children, who is a God of joy and merriment and who brings light in the dark of the year. As a Wiccan, when I say that the Goddess enters the circle I do not mean Aradia in all her glory saunters in incarnate and unaided. No, the Goddess enters the high priestess and speaks words of wisdom and love. The priestess is a vehicle for her presence. Do I lie when I say the Goddess enters the circle? Not at all. If the Gods prompt me to send someone flowers, is it a lie to say they were from the Gods? I think not. Just so, when parents fulfill the cultic obligations of Santa Claus by placing gifts in the secretive night, is it a lie to say Santa brought the gifts? Of course not.

Like Odin, Artemis, Diana, Befana, Mother Hulda, Baba Yaga, and Perchta, Santa is a God of Children. His cultic mythos and obligations are simple and easy for children to grasp, and he is a great way to teach children about religion. Pagan parents acting as his priests can encourage their children to right actions, respect, and proper observance of holidays. By keeping the rewards small and meaningful, parents can embrace the tradition of giving without embracing the consumerism that has become too prevalent in our holiday celebrations. I can't name 90 percent of the toys I got at Christmas but I remember vividly the long tube sock "stockings" my grandmother filled with oranges, nuts, and hard candies for us every year. Even today I smell Christmas oranges and think of her.

I find it bittersweet that now that I am old enough to be a "priest of Santa," there are no longer any children under his care in my life. As a child he taught me piety, joy, the virtue of right action, and the beauty of mystery. Having been a recipient of his gifts I long to pass them on to the next generation. The lovely simplicity of his worship prepared me for the more complex relationships I built with Gods as an adult. I believe and have faith in things unseen, I abide by the obligations given me by the Gods, I make appropriate offerings and I am rewarded. Although today my obligations may be more difficult than simply not being naughty, my offerings are no longer cookies and milk and my rewards are more often insight and work opportunities than a new doll or a tube sock full of oranges. I am grateful for Santa. He is holy and deserving of our love and respect.