Religion Neutrality: The Path of Peace

When it comes to religious displays on public property, the United States is experiencing relatively severe growing pains, but is maturing into a country that once again can lead the world by example.

These are dangerous, terrifying times, because Islamic religious zealots are intent on eliminating us and our culture. We threaten the tyrannical leaders of the terrorists not because so many Americans are Christian, but rather because the government does not, cannot, and will not control religious belief or doctrine. They want domination and to make the world in their image, plain and simple.  Local, state, and federal governments are governments of all of the people, not just those who share particular religious beliefs.

It is easy, though, to lose sight of this crucial feature of American history and culture when we start fighting over who has a right to have their message displayed on public property. This holiday season, Philadelphia has been the battleground over holiday messaging.

Philadelphia City Hall has been the site of a "Christmas Village" for two years; it is an outdoor gathering of vendors in booths. While it is organized by the German American Marketing, Inc., its organizer claims to have Muslim, Jewish, and Christian vendors. It is open from Thanksgiving to Christmas.

At one level, the City deserves the dispute, because it never should have permitted the market to be called a "Christian" anything. The title, "Christmas Village," simply is not accurate. It is a market where crafts from around the world are sold, not a display of Christmas symbols. When it was first introduced, the City should have told the organizer that while a market might be welcome and fun, the government must not distinguish among its religious citizens. All but the darkest religions celebrate a holiday, so this was an opportunity to reinforce and celebrate the peaceful diversity of religious believers in Philadelphia. "Holiday Village" is the accurate label.

At another level, though, one can sympathize with the Nutter Administration trying to find its way through the culture wars. As I said before, this is an era of difficult but important growth. It is becoming increasingly indefensible for any American government to identify with any single religious group or doctrine. Diversity and variety are everywhere. The so-called "War on Christmas" is nostalgia for a time when we weren't so aware of these differences, when neighborhoods could be identified reliably according to faith or ethnicity, when segregation went well beyond race. Those were "simpler" times, but sometimes simplicity is another word for suppression.

Widespread integration of the races and religions is simply a fact now. At one time, the Supreme Court referred to this as a "Christian country." Then it was a "Judeo-Christian" country. In its most recent cases, it has been described as a "monotheistic" country. These changes in terminology reflect the increasingly inclusive character of our collective self-image. It will not be long before "monotheistic" is not inclusive enough, either.

So should holiday displays be permitted on public property? Governments have two choices under current Supreme Court First Amendment doctrine. They can choose to keep those displays on its property religion-neutral. In other words, "Holiday Village" works, but "Christmas Village" does not. Or they can choose to be as inclusive as possible. The government can open designated land for citizens to post their own religious messages, or the government can host a gathering of religious messages. Once again, "Holiday Village" is the better descriptor.

Either way, it is plain to the observer that the government is staying neutral as between religions. The people can and will choose their faith -- or not. Therein lies the irritant for the terrorists, and the example that can teach the rest of the world how peace can be achieved in the context of difference. 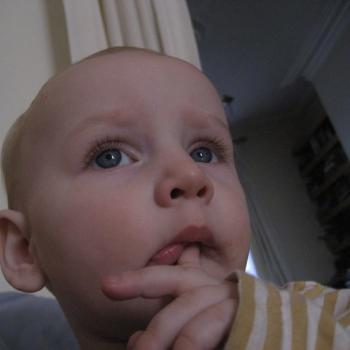 Practices From the Inside Out: When We Ponder Together
Greg Richardson
3

Commonwealth, II.XLI: The Comfort of Insignificance
Adam Lee
Get Patheos Newsletters
Get the latest from Patheos by signing up for our newsletters. Try our 3 most popular, or select from our huge collection of unique and thought-provoking newsletters.
From time to time you will also receive Special Offers from our partners that help us make this content free for you. You can opt out of these offers at any time.
see our full list of newsletters
Editor's picks See all columnists