Lest there be any confusion, let me begin by admitting I am no liturgical expert. I have gone to some length to avoid becoming one, trying to shut controversies over the wording of the Mass out of my head while at prayer. As a convert from Anglicanism -- and very High Anglicanism at that, with smells, bells, and the traditional Catholic music -- I was of course appalled on first entry into the postmodern Roman wasteland. Yet I've tried to accept it as an aesthetic wasteland and distinguish in my mind between a Mass that is valid and a Mass that is beautiful. For the Lord knows, High Anglican aestheticism could be shallow.

More deeply, I don't think it should be the business of the laity to worry about liturgical texts and gestures. There should be priests taking care of that. They're paid to do a job, even if it is a job that makes, sometimes, more than human demands.

To my understanding, as reader and thinker but no expert, a huge catastrophe befell the Church in the immediate wake of Vatican II. As one result of it, the priestly calling became extremely difficult, and the laity became intimately involved in liturgical controversy. For suddenly, Catholics were being told different things from different sources, all claiming authority of some kind; and even if they did not want to, lay Catholics had to decide who was telling them the truth.

I wasn't in the Church in those days, and though they happened within my lifetime, the events still seem hardly credible. Millions may not have been killed, as in the greatest massacres of history, yet it is hard not to think of the image presented by Our Lady of Fatima -- of souls falling like snowflakes into Hell -- as one ponders the fallout from the "reforms."

For faithful Catholics of a previous generation, with whom I have spoken, there is often a sense that the Church left them. The Mass was utterly changed before their eyes. The insides of their churches were gutted, on a scale not seen since the Reformation when Calvinists and other fanatics went to work on Catholic symbols with mallets and crowbars.

The shunning of Latin and the development of a phobia toward its use was a further decisive, Protestantizing change. That Latin inheritance was suddenly replaced with crass translations into faux-contemporary English. A conscious effort was made not only to avoid the poetic but to smash the rhythmic and pedal order of words that had scanned with the music of the Mass. Centuries upon centuries of accumulated beauty were destroyed, pulverized, almost overnight.

For many, the turning of the priest, intentionally away from God, was the key to the "reforms." Suddenly he was set in confrontation with the faithful, no longer praying with them but rather making demands of them, through offices worded as if they were small children. The English responses make me shudder to this day, for they embody a form of indoctrination that is not Catholic but rather almost Maoist in flavor. The congregation is supposed to "participate" by collectively reciting lines constructed like cumbersome revolutionary slogans.

But beyond the priest, I have looked, as I think former generations looked, for the comfort of the Real Presence. To my mind, the center and focus of Catholic life could be in nothing else but this living Christ; and therefore our minds seek out the Tabernacle. But in the course of the "reforms," it seems to have migrated, we know not where. How could anyone of genuine faith place it anywhere but in the front and center of our attention?

I've heard explanations that make me bleary. I've heard crackpot theories about early Church life -- exactly the sort Protestant demagogues used to confuse the peasantry centuries ago. And yet, at the height of the "reforms," these were coming down like snow through the Catholic hierarchy itself, in the bureaucratic language of episcopally appointed commissions, shaking and shivering the faith of the laity and discouraging all Catholic vocations.

Christ came to fulfill, not to overthrow, the prophets. It is a myth -- I think perhaps the central Protestant historical myth -- that the earliest churches made a radical break from the Hebrew Temple worship; that their services "evolved" experimentally, in parallel with those in the synagogues, through the first few centuries after the Temple was destroyed.

At the root of this myth is the denial or forgetting that Christ is the Temple. And what is shocking about the traditions of the Mass, both East and West -- archaeologically shocking, as well as spiritually -- is the continuity from Temple worship. That Tabernacle is the Holy of Holies, and the orientation of all Orthodox and Catholic worship toward it is of a piece with the most ancient Hebrew worship.

What Did the Cross Accomplish?--- Wright, Gathercole, and Stewart
Ben Witherington
2

Render Unto to Ceasar... What Did Jesus Teach About Church and State?
Rebecca Hamilton
3 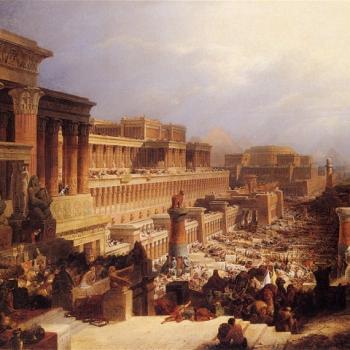 Faith Is About Asking the "What If?" Questions
Vance Morgan
Get Patheos Newsletters
Get the latest from Patheos by signing up for our newsletters. Try our 3 most popular, or select from our huge collection of unique and thought-provoking newsletters.
From time to time you will also receive Special Offers from our partners that help us make this content free for you. You can opt out of these offers at any time.
see our full list of newsletters
Editor's picks See all columnists