The Seeds of the Impossible Kingdom

This Advent, our community is interacting with the lectionary texts from Isaiah each week. With Isaiah's visions of swords turning into plowshares and lions playing with lambs, it's not exactly the easiest of tasks. "Welcome to Advent, where the people of God declare the coming of the impossible!" I've said for the past two weeks. In all truth, however, this is a high calling for us this season. We are to be the people of light in a world filled with shadows, and let's face it, that ain't easy. This year, our community is focusing on an Advent theme of "the seeds of God's realm/kingdom," which means we are reminding each other that we're not off the hook for seeking the impossible, no matter how hard it seems. If this is what the dream of God looks like, our job is to live into it with every bit of intention we've got.

Last week as our Teaching Team gathered, we had a particularly robust conversation about Isaiah 11. What does it mean for Isaiah to speak about lions becoming vegetarians, and calves and bear cubs becoming friends? What kind of message does that have for us this Advent season? There are certainly a number of layers at work in the text -- shock, the juxtaposition of the reality we know and the reality of which we hope, hyperbole, metaphor, and the very real circumstances of war in which the Book of Isaiah was composed. We found, after batting around a number of themes, that our conversation kept returning to one of fear and trust. We have the choice at Advent to be people of light, hope, peace, and joy, or to be people who feel so overwhelmed by reality that we cannot imagine anything else. Isaiah says, "He shall not judge by what his eyes see, or decide by what his ears hear; but with righteousness he shall judge the poor, and decide with equity for the meek of the earth." This seems a rather irrational thing to do, doesn't it? We don't tend to go around making decisions that go against the very real evidence of what we see and hear. What distinction is Isaiah trying to make between our experiences and our search for righteousness?

One of our Elders, Zuriel, saw a parallel in how people worry about the safety of their neighborhoods. Americans have increasingly lived isolated lives because the local news tells us it isn't safe to let our children ride their bikes around the block. Whether it used to be safer or not in "the good old days" is hard to say in our 24-hour news cycle world, but it is fair to say that American parents often lead with fear these days. What would it mean to judge not by local news reports but with a righteous desire toward neighborliness?

Another bit of conversation that gained traction was around the radical image of a vegetarian lion, perhaps because it is so strange and jarring. Jessica pointed out how difficult an identity shift this would be for the lion. What would it feel like for the lion to make that change? Is there any parallel in our own lives, when we must choose not to be lion-like? Luke added that there is a similar difficulty facing the lamb. How does a lamb do the work of beginning to trust a lion? And how does a mother know it's safe to allow it? The themes of fear and trust run deep, and on that level Isaiah 11 begins to feel less fantastical and a lot more personal. We are most certainly not off the hook.

After the Sunday gathering, Ed, one of our community members, brought up a great point we hadn't considered at Teaching Team. He believes American Christians too often assume that a world of shalom is impossible because we have turned our focus so much on sin and brokenness.

This is why we must tell a story of creation that begins with shalom. If we focus theologically on creation as being good, which inherently means being a place of trust and not fear, then it doesn't seem such a far stretch for us to believe it can be that way again. To put this in stark terms, why do we believe these actions of peacemaking and trust-building are so impossible? Can we stop judging only by the most negative parts of reality that our eyes see and hear, and trust that the seeds of God's realm are growing quietly but perseveringly under our feet?

Check back every other Tuesday for the latest from Preaching in Community, a new featured column at the Patheos Preachers Portal.

How L. Ron Hubbard and Dianetics Helped One Woman Set a Successful Course for...
ScientologyBeliefs
2

Rejected in All Quarters But One
Frank Viola
3 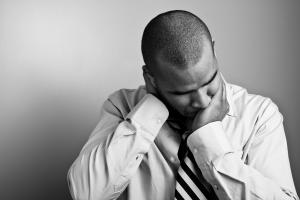 Shame Is Not Guilt
Duncan Pile
Get Patheos Newsletters
Get the latest from Patheos by signing up for our newsletters. Try our 3 most popular, or select from our huge collection of unique and thought-provoking newsletters.
From time to time you will also receive Special Offers from our partners that help us make this content free for you. You can opt out of these offers at any time.
see our full list of newsletters
Editor's picks See all columnists