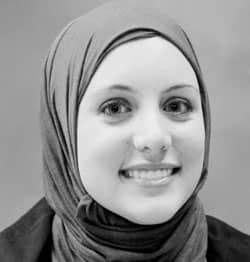 I appreciate Cassidy Herrington stepping out of her comfort zone, or as she said it, "climbing out of [the placating, soothing] "lap" of safety, to wear a hijab for a month. She gets credit for making a sincere effort to understand Islam and Muslims by going literally "under cover" for a month donning the hijab. I sincerely applaud this undertaking.

I am also elated that Ms. Herrington sees the hijab as more than a piece of cloth, and understands that in wearing it, one propels themselves to the position of representation and high-level scrutiny. In fact, given this very climate of fear and phobia, Herrington deserves an honorable mention for this heroic feat.

And I will most certainly not take away the pleasurable feelings associated with one of her favorite memories of wearing hijab, where she received a positive and uplifting compliment on her new look by her friend, an owner of a Mediterranean restaurant. I can understand what that compliment must have meant, considering that most of her beauty was veiled and vaulted away.

But this validation of physical beauty seems to be the culmination of that account, rather than a beginning to riveting dialogues between herself and this friend.

If Herrington was simply interested in the "hijab-ed" perspective, then I would call this project complete. Presenting this angle as a positive one is important to relate in light of the remarks made by former NPR news analyst Juan Williams about being nervous around people with "Muslim garb" -- a remark that Herrington herself points to as a sign of misguided fear and irrationality.

When Ms. Herrington said, "I realized the best way to identify with Muslims was to take a walk in their shoes," she should have realized that it's not a "one size fits all" situation. Her goal was to "walk like a Muslim," which I take to mean the goal of attaining the 360 degree experience of being a Muslim, which includes hijabis, non-hijabis, kufi-wearers (skullcap), non-kufi-wearers, full hijabis, partial hijabis, convertible hijabis, and skateboarders.

Going "under cover" as a Muslim to get to know Muslims implies that we are a closed, isolated group of individuals whose experiences cannot be known and understood unless an outsider comes in to examine us, like an American safari team traveling to Africa to study the behaviors exhibited by the Chacma Baboon. A 2009 piece at Muslimah Media Watch entitled, "Burqa Tourism at its Finest: How to Become an Expert on Muslim Women in Just One Week" echoed a similar sentiment in its comment on British policewomen and journalist Liz Jones deciding to wear the burqa to understand Muslim women.

In her piece, Herrington expressed, ". . . [N]o one addressed the obvious, and it hurt." While she was talking about how people didn't point out her hijab (perhaps due to awkwardness), I want to express the hurt I feel in no one addressing the obvious ways to learn about one another: talking to people without having to go "undercover" or attending a meeting or event associated with a certain group sans a specific agenda or purpose. This is Socializing and Understanding 101.

Meeting a Muslim person shouldn't be an "encounter" or an "event," but as ordinary a thing as Folgers coffee in the morning, or checking your email on your way to work. I recall a time when I was invited to speak to a 7th grade class about Islam and Muslims and was amused by an introduction that went something like "And now class, you are going to meet a real-life Muslim!" Or do you mean Chacma Baboon?

Cassidy Herrington's message drawn from her experience is invaluable.

Her decision to share this transforming journey is admirable. Her encouragement to talk to Muslims and to ignore dim media perceptions of us is wise and appreciated.

But I assure you, getting to know Muslims without going undercover will be as equally a transformative and memorable experience, if not more.