"Tangled" Up in Consumerism

Ed Catmull, head of Disney Animation, recently told the L.A. Times that the studio famous for Cinderella and Sleeping Beauty and Snow White has no plans to produce any more "princess films." They cite a waning interest in princesses among young girls as the reason for this decision. Reading between the lines, that means they aren't making any more princess movies because princess movies don't sell. 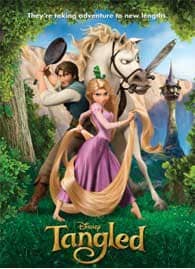 One might consider it strange that this revelation from Disney came days before the release of their latest animated epic, Tangled, a reimagining of the story of that lengthily-locked tower dweller Rapunzel. Princess movies don't sell? Then why make yet another princess movie?

Clearly the reason for the announcement is to raise interest in their latest film. The logic is meant to work like this: "If people think we aren't going to make any more princess movies, they're more likely to go see the 'last one.'" It's marketing, pure and simple. The studio has "no plans" to make another princess movie; that doesn't mean those plans can't change at any time.

Actually, a simple Google search on Tangled reveals that most news items concern the marketing of the film. The movie went through a rebranding in the last year. The title was changed to Tangled instead of Rapunzel and the advertisements focused more on the male lead than they did on the heroine. This was to garner a bigger audience, as Disney felt their last princess movie, The Princess and the Frog, suffered from low little-boy attendance. (I thought it suffered because it was just a mediocre movie, myself.)

But this is Hollywood, after all, and movies are judged on their earning potential much more than on their narrative merit. That's why the big headlines each week have to do with what took in the most weekend box office receipts. Quality matters little compared to quantity of dollars earned. That's a shame really, for the quality of the world we live in and for Tangled.

Tangled is a fine movie. Is it fantastic? No, but it is better than many of the Disney animated movies of recent years. It's not a Beauty and the Beast or The Lion King, but it is easily better than The Hunchback of Notre Dame or Mulan. Tangled is unremarkable in that it checks all the boxes that a Disney fairy tale is supposed to check (Broadway-style songs, light humor, romance, complicated parent/child relationships); it is remarkable in that it checks all those boxes with convincing sincerity and gusto.

I also found it strikingly poignant in moments. A key plot element concerns a kingdom's yearly ritual of sending up thousands of hot air powered lanterns into the night sky in longing for their missing princess's return. This princess's hair hold the power to heal all wounds and bring the dead back to life, to right all wrongs waged by fate upon humankind. In her hair and in the lantern-like prayers, I saw creation's collective longing for all things to be made right, a longing that is ultimately fulfilled in Christ, in His resurrection, and in His Kingdom's reign.

It's a shame that all this goodness is being overshadowed by marketing concerns, but I suppose that is the world we live in, a world that rules with and is ruled by the almighty dollar, a world not concerned with the things of the Culture of Christ, a world that defies that those Christ-like things matter.

And yet, they can't help but write stories about people longing with all their hearts for all things to be made right, longing for death to be undone, and longing for even the tyranny of market capitalism to be cast down.

I hope that people might listen more to the heart behind Tangled and less to the marketing. I hope that Rapunzel might let down her all-healing hair and pull us up into a better world.