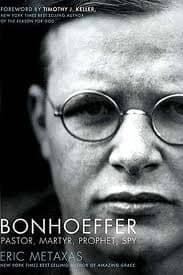 A welcome new biography of one of the 20th century's leading lights. Metaxas magnificently captures the life of theologian and anti-Nazi activist Dietrich Bonhoeffer (1906-1945), who "thought it the plain duty of the Christian—and the privilege and honor—to suffer with those who suffered." In the finest treatment of the man since Eberhard Bethge's Dietrich Bonhoeffer: Man of Vision, Man of Courage (1970), Metaxas presents a complete, accessible picture of this important figure, whose story is inspiring, instructive, and international in scope. . . . Metaxas rightly focuses on his subject's life, not his theology, though readers will learn plenty about his theology as well. The author makes liberal use of primary sources, which bring Bonhoeffer and other characters to vivid life. For the most part, Metaxas allows this epic story to play itself out, unhindered by commentary; where he does add his own voice, the conclusions are sage. A definitive Bonhoeffer biography for the 21st century. (Kirkus Reviews)

God Is Not One: The Eight Rival Religions That Run the World—and Why Their Differences Matter
HarperOne
400 pp.
By Stephen Prothero

Prothero vehemently disagrees with the politically correct notion that all religions are equal. "This is a lovely sentiment, but it is dangerous, disrespectful, and untrue." The idea of religious unity, he maintains, is nothing but wishful thinking. Hence, this book is meant to be—and most definitely is—a bracing dose of realism. Religion is not just a private matter, he continues. Rather, it affects the world from social, economic, political, and military perspectives. Religion has two faces as a force of both good and evil. He discusses what he considers the great religions of the Middle East (Judaism, Christianity, and Islam), India (Hinduism and Buddhism), and East Asia (Confucianism and Daoism)—great in this context being contingent on number of adherents and historical significance. As the eighth religion of the subtitle, Prothero includes—which may surprise some—the Yoruba religion of West Africa and its vast diaspora. There is also a brief chapter on atheism. Provocative, thoughtful, fiercely intelligent and, for both believing and nonbelieving, formal and informal students of religion, a must-read.  (Booklist)

Nine Lives: In Search of the Sacred in Modern India
Knopf
304 pp.
By William Dalrymple

Dalrymple, author of prizewinning works of far-roaming inquiry, including The Last Mughal (2007), knows when to let others speak. Which is what he does with great finesse in this evocative set of portraits of nine spiritual seekers living across India. Nine lives that open doors onto nine of India's many arduous paths to the divine and reveal striking, nearly surreal juxtapositions between the old and the new. There's the haunting tale of a Jain nun who as a girl renounced her life of privilege and the wrenching story of Rani Bai, a devadasi, or servant of the goddess Yellamma, who was forced into prostitution as a girl. Hari Das describes what it feels like "to be taken over by a god" when he performs theyyam, the sacred possession dance of Kerala, only to return to his dangerous work as a prison guard.

Dalrymple sets each vivid profile within an intricately drawn history of the ancient and now-endangered tradition each devotee is dedicated to preserving in the escalating battle between holiness and hustle that is transforming India. (Booklist)
Article Continued On Next Page
Page: 1 of 4
12/25/2010 5:00:00 AM
About