Trying to Love "The Voyage of the Dawn Treader"

If you've been reading my reviews for a while, you may have noticed that I do not tend to write negative reviews. I may be critical of certain aspects of certain movies and TV shows, but I always try to find something positive to talk about in every work. 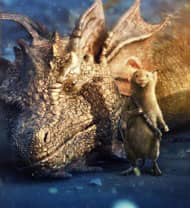 In fact, I don't actually consider what I do "reviews." I consider them more "interactions." First of all, I am not a film scholar or filmmaker, and so I do not think myself qualified to comment on the technical aspects of film. Secondly, I believe that behind every work of art is a person or group of people, and I don't want to dismiss what they have created.

Also, most people (at least those with whom I prefer to spend time) aren't interested in preaching at me. They are simply telling their stories in the best way they know how and trying to make their stories as good as possible. People are hard to take seriously when they become didactic, forcefully opinionated, and cliché-ridden. One might say they become harder to love.

I am trying very hard to love The Chronicles of Narnia: The Voyage of the Dawn Treader. This third film in the Narnia series follows Edmund and Lucy, the two youngest members of the Pevensie family, and their obnoxious cousin Eustace as they return to Narnia for an epic sea voyage onboard now-King Caspian's gilded ship, the Dawn Treader.

The story involves slave traders and dragons and invisibility spells and mermaids and sea serpents and a star that assumes the form of a beautiful woman. The movie is a passable, family-friendly adventure flick. You will be entertained, though there is very little here that you haven't seen before. There are also, for the Christian audience members who are sympathetic to them, plenty of homages to the Christian themes contained in the book.

The book is a wandering epic consisting mainly of interesting scenes loosely connected by a central plot that is proven to be a red herring in the end. The book is ultimately about the journey. Character development happens in episodic moments on various islands, but on the whole, the book's story is disjointed, connected only by the theme of faithfulness in the journey. The film version of the Dawn Treader imposes a stronger central plot line on the story and tries to connect each episodic element to that plot. This largely feels contrived.

Instead of a story about faithfulness, in the film we have a story about overcoming personal demons through willpower and grit. This is a much weaker theme, and, I would argue, a false one. We overcome in and through Christ in spite of ourselves. Similarly, in each of the episodes in the book, the characters only overcome because Aslan intervenes. In the movie, Aslan comes in after they have overcome to explain. Herein the film becomes didactic, forcefully opinionated, and cliché-ridden.

A very good example of this is found in the scene that is getting the most press. At the end of the film, Aslan appears and explains to Lucy that she was brought to Narnia to get to know him so that she might recognize him in her own world in the form he takes there. The Great Lion Aslan is, very famously, Lewis' incarnation of Jesus in a world of talking animals. In the film, this revelation comes across as a *wink**wink* to the audience. In the book, it is a statement on Lewis' purpose in writing his fantasy—that the reader, having seen Christ at work in Narnia, might better recognize Christ's work in the real world. In the book, this is Lewis' defense of fantasy. In the film it is a moment of evangelical pandering.

Ultimately, there is a disconnect in the Dawn Treader film between what it says it believes and what it lives out. It is so concerned with message that it forgets to incarnate that message into a good story. Like so many street preachers and political pundits, it talks a good game about a better way to live, but it never stops talking and begins to do. A good movie, like a good person, shows instead of tells.