Changing Popular Culture for the Better 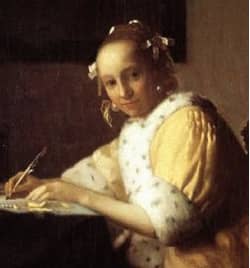 A lot of attention gets directed at complaints about movies, TV programs, and other forms of media that offend large groups of Catholics or other Christians. A recent example would be the response to the movies The DaVinci Code and Angels and Demons. Alerting the public to this kind of material, which often completely misrepresents the history or beliefs of the Church, is a noble endeavor, but opposition alone isn't enough to improve things.

So let me ask you this: when was the last time you sent a letter of praise to a network, producer, or writer after seeing something you liked? It's easy to fire off angry emails when something gets your blood boiling, but why not express yourself when you find something good too?

In his book You Can Change the World, Father James Keller, the founder of The Christophers, wrote:

There is some value, of course . . . in turning off vulgar, boring or subversive radio and TV programs . . . But the cure does not lie there, for it is like objecting to bad food without providing anything better . . . New and better writers can be found. They will come from among you . . . the vast group of Americans who constitute the backbone of our nation and of our Christian civilization.

Keller rejected the idea that the powers that be "don't want worthwhile people in the writing field." He believed that if we get more people "who are articulate in supporting their beliefs . . . the whole trend toward materialism in this field can not only be stopped but changed for the better."

Father Keller didn't believe in writing off popular culture. Instead, he encouraged people to find what's good, then praise it and support it. By doing so, he believed, concerned consumers would be demonstrating to the people who produce this kind of material that the audience wants more projects like it. And in terms of the creative talent, supportive responses would make them feel their effort was worthwhile.

An upcoming Christopher News Note shares the story of a magazine writer named Teresa who was stressed out by numerous deadlines. Then she came across a letter from a reader that said, "I just wanted to write to encourage you in your efforts because your writings always bring me such hope."

The News Note states, "Teresa placed the note . . . on the shelf above her desk as a daily reminder of the light always trying to peek through the darkest of moments."

So there's proof that praise and gratitude have a positive effect, and anyone can do it!

Another of Father Keller's suggestions is equally important; the quality of our entertainment and media will only change through constructive action. Therefore, if your kids, grandkids, nieces, or nephews display media-related talents, encourage them to pursue those talents as a career, to learn their craft and then take those talents and values into the world.

Maybe you could even develop those talents yourself! The goal, though, shouldn't be to proselytize, but to share stories that offer witness to truth.

The bottom line: if we knock the folks who work in media when they do something wrong, we should also praise them when they do something right. And wouldn't it be great if there were more people who would feature and create the kinds of stories Christian families and individuals say they want more of? Of course! The success of that endeavor lies in all our hands.