Fall to Grace: A New Book by Jay Bakker 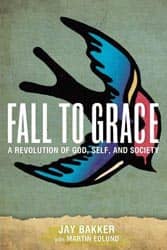 If anyone ever had a reason to leave the Christian faith, Jay Bakker did.

At the age of only 11, his parents' global PTL ministry was engulfed by scandal and undermined by Christian backbiting—all of which played out in the 24-hour news media.

Disillusioned, Bakker turned to drugs and alcohol and left his childhood beliefs behind. But along the way, an interesting thing happened: Bakker came to understand, through his personal challenges and suffering (as well as the help of some friends), what God's grace was really all about.

In his new book Fall to Grace: A Revolution of God, Self & Society, Bakker explores the true nature of grace—what it means for everyday living and the hot-button issues of our day. With disarming humility, poignant observations, and spot-on theology, Bakker both challenges Christians to reassess their understanding of salvation and encourages non-believers to see Jesus with fresh eyes.

"With Fall to Grace, Jay Bakker has written just the book that Christians on both sides of our tragically polarized faith need to read. Relying on both his own personal experience and a thoughtful and theological reading of the New Testament, he reminds us of the very core of the gospel. And, in so doing, he challenges me to reconsider the Apostle Paul, the biblical writer with whom I most often wrestle. This book deserves a wide readership." ~ Tony Jones, author of The New Christians: Dispatches from the Emergent Frontier and the theologian-in-residence at Solomon's Porch in Minneapolis

"Jay is right: a revolution is taking place. And it's a revolution of grace, affecting our view of God, our view of ourselves, and our view of neighbor, stranger, enemy, and outcast. As I read this honest and challenging book, I kept thinking, ‘Sign me up for the revolution!'" ~ Brian McLaren, speaker, activist and author of A New Kind of Christianity

Jay Bakker is a 32-year-old pastor who grew up witnessing both the good and bad of the church. His parents are Jim and Tammy Faye, ministers-turned-TV-hosts who helped start both the Trinity Broadcasting Network and the 700 Club in the 1970s, and later founded the PTL (Praise The Lord) Club. At the height of their popularity, they pastored the largest church in the country—until their lives were changed by one of the biggest scandals in American history. For the first time, Jay was exposed to the dark underbelly of religion, an experience that would stay with him to this day.

After witnessing firsthand the excommunicative treatment his family received from the church, Jay wanted nothing to do with God. And so began a new life filled with substances easily abused and nonstop partying to mask the pain and suffering caused by this surreal rejection. Eventually, Jay was able to conquer his demons and made a personal decision to find out who God really was. What he discovered floored him: God wasn't some judgmental, condemning deity sitting on a throne waving an angry fist in the direction of sinners; rather, he was an understanding God offering his gift of love and grace with no strings attached. For the first time Jay wasn't being driven to Christ out of fear; he was being drawn to Christ through love.

As a result of this discovery, Jay started a church for those who feel rejected by traditional approaches to Christianity; this church is called Revolution. The idea behind Revolution is to show all people the unconditional love and grace of Jesus without any reservations due to their lifestyles or background, past or future. In the desire to bypass geographical boundaries, all services are recorded and posted on the Revolution Church website to create an "online church for people who have given up on church."

In addition to pastoring Revolution, Jay travels the country speaking to churches and organizations, encouraging them to reach out to the lost and hurting. His goal is to return to the grassroots of Christianity founded on inclusion, love, and grace; his heart is helping people realize that God loves them no matter what.

Jay has spoken at numerous festivals and churches as well as appeared both on television (One Punk Under God, Larry King Live, 20/20, Good Morning America) and in print (Rolling Stone, NY Times, Time, FHM, Charisma, Relevant).