From Dalits to Divinity: A Hindu Solution

As I reflect on the legacy of Martin Luther King, Jr., by participating in the MLK Day of Service, I thought of these words from his "Letter from a Birmingham Jail": "Injustice anywhere is a threat to justice everywhere. We are caught in an inescapable network of mutuality, tied in a single garment of destiny. Whatever affects one directly, affects all indirectly."

Recently, the Hindu American Foundation, an advocacy group concerned about issues impacting Hindus in America and around the world, published a report, "Hinduism: Not Cast in Caste—Seeking an End to Caste-based Discrimination." HAF (of which I am an Executive Council member) is a prominent Hindu American organization, and it articulated its views about caste in this report, so it can be used in interactions with media, interfaith fora, policymakers, non-governmental organizations (NGOs) and the American public at large. HAF's report took five years of dedicated research, interaction with and support from a broad spectrum of scholars and spiritual leaders from various sampradayas (traditions), and a willingness to focus inward.

Caste-based discrimination is a problem throughout South Asia today, and the organization's stand against caste-based discrimination and birth-based hierarchy outlines how Hinduism can be the solution to the problem. It also explains how caste is not intrinsic to Hinduism, and speaks to the complexity of caste in the Indian context, where political and economic factors are of major impact to the issue. The report also describes how conversions to Christianity (and other religions) have not led to an improvement in the situation of converts, who continue to suffer discrimination at the hands of "upper caste" Christians, even while missionaries are using caste as a reason to vilify Hinduism. Supporting documents include a statement from a Hindu SC community leader in Chattisgarh affirming his pride in Hinduism, and an article on the plight of Christian Dalits by a well-known Christian interfaith activist. HAF follows the tradition of many Hindus and non-Hindus who have worked on social reform to bring about justice and equality: we are all one human family, "Vasudaiva kutumbakam"; what affects one of us, affects all of us.

For the foundation for my understanding of caste, I take you to a comic book of sorts: an Amar Chitra Katha. As a young girl growing up in America, I loved these picture books; among my favorites (still) is one titled Adi Shankara. I was young enough to have memories that seared into my consciousness concepts of social justice, the role of women, and the importance of family life. The image from the cover of this Amar Chitra Katha was also etched in my mind: the debate between Mandana Mishra and Shankara. Mandana Misra's scholarly wife, Ubhaya Bharati, agreed to serve as the moderator, and one can see these three primary characters seated on low stools surrounded by an audience, with two snow-white flower garlands adorning the debaters. These would be used to determine the winner—the garland of the one whose arguments didn't hold up would wither away. The book laid out Shankara's advaita Vedanta—the nondualistic philosophical approach to God found within Hinduism—as it chronicled some other key points in his life story.

The book also illustrated how Shankara composed Manisha Panchakam. A man who did the work of cremation (a chandala, an outcaste) approached this great 8th-century Hindu saint, who had bathed and was on his way to the temple in Varanasi. When Shankara's disciples demand that he move out of the way, per the practices of those days, the outcaste asks, "What should I move, my Self (the divine consciousness in each person) or my self, represented by one's body and flesh?" From this simple story, I understood that there is divinity within each one of us, regardless of who we are born to, and what job we do.

So when I moved to India at the end of tenth grade, I believed that your actions and your words are what determine where you fit into society, and then I learned that it wasn't that easy, that people still practice birth-based caste, the practice is not confined to Hindus, and caste in India is complicated by factors too complex to cover in a thousand-word essay.

Fast forward a few decades, and I have become an active member of the community where I live, volunteering and working in various ways to improve the quality of life of those around me. I have become an ambassador of sorts for my faith, serving as the Hindu voice at interfaith events, participating in service and social justice events, giving lectures and presentations on Hindu beliefs and practices, all while promoting pluralism and promoting understanding of "the other." I usually let people know it's okay to ask me about anything, and in the top five I usually end up with questions on caste, on arranged marriages, and the bindi (the dot on my forehead). So how thankful I am that I am able to provide not only my Amar Chitra Katha and Shankara's Manisha Panchakam (taught to me by the Temple's senior priest), but now a professional research report from HAF, along the lines of our annual "Hindus in South Asia and the Diaspora: A Survey of Human Rights." 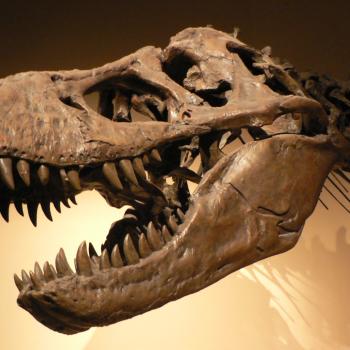 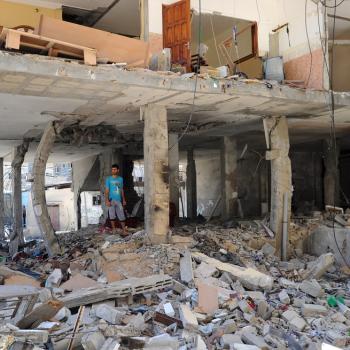 "When I was hungry, you handcuffed me" – see Jesus in Palestinian children
Kathryn Shihadah
3

Covenant to depict modernized, dystopic Bible stories
Peter T. Chattaway
Get Patheos Newsletters
Get the latest from Patheos by signing up for our newsletters. Try our 3 most popular, or select from our huge collection of unique and thought-provoking newsletters.
From time to time you will also receive Special Offers from our partners that help us make this content free for you. You can opt out of these offers at any time.
see our full list of newsletters
Editor's picks See all columnists