Good News for the Future of Preaching 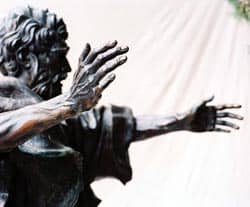 I have seen the future of preaching, and it's a beautiful thing.

As the producer and host of the "Day 1" radio program, which gives outstanding mainline Protestant preachers an international pulpit on 200 stations and online, it was my privilege to attend the second annual National Festival of Young Preachers, an initiative of the Academy of Preachers.

Through my work with "Day 1," I hear many more preachers than most people ever do. But I can tell you that I am now more hopeful about the future of preaching than I ever have been.

Nearly 130 young men and women—high school and college/university students, seminarians and graduate students—came together in early January with their mentors (usually a pastor or teacher or other church leader), some family members and friends at the Seelbach Hilton in Louisville, Kentucky for three days of nearly non-stop preaching. The event is designed to encourage young people who aspire to be preachers of the Christian faith by giving them a platform and feedback from peers, mentors, and other evaluators.

The purpose is to identify these young people and sustain them in their call, organizers explain, "cultivating within them the conviction that gospel preaching is a vocation of great social and spiritual significance and is worthy of their very best."

It's not a competition—there are no "American Preaching Idol" judges here. Rather, "it's a celebration, an inspiration, an occasion of mutual edification and encouragement." And it is an authentically ecumenical enterprise—certainly one of the most ecumenical endeavors in American Christianity today.

Participating were young preachers from across the country of nearly every race and tradition: Roman Catholic, Orthodox, mainline Protestant (including United Church of Christ, Presbyterian, Lutheran, Episcopal, United Methodist, Christian Church/Disciples of Christ), Pentecostal, every sort of Baptist you can think of (Southern, National, Progressive, Cooperative, General, Alliance, Independent), Church of Christ, Church of God, African Methodist Episcopal Zion, Christian Methodist Episcopal, Nazarene, Ethiopian Orthodox, independent, and nondenominational. And I'm sure I missed some. It truly couldn't have been more diverse.

In plenary sessions we heard from some, shall we say, more mature church leaders—who proceeded to school us all in how it is done. The Rev. Dr. Sharon Watkins, general minister and president of the Christian Church (Disciples of Christ), the Rev. Dr. Teresa Fry Brown, professor of homiletics at Emory University's Candler School of Theology, the Rev. Dr. Robert Smith, associate professor of divinity at Beeson Divinity School, and the Academy's founder and president, the Rev. Dr. Dwight A. Moody, connected powerfully with the word of God and the enthralled listeners.

At a fun evening banquet dubbed "Preachapalooza," attendees enjoyed bluegrass music, Kentucky cuisine, and a stirring message from Dr. Craig Dykstra of Lilly Endowment of Indianapolis, Indiana, whose generous grants have helped the Academy and this National Festival explode in the first two years of their existence.

But the highlight of these three days by far was experiencing the preaching of these young men and women. (You will be able to see them on the Academy's YouTube channel.) Four sessions occurred simultaneously throughout the conference. I sat in on nearly thirty sermons and evaluated nine of them, and I was profoundly impressed by each one I heard. No matter what their denomination or background or preaching style, their respect for the text, their creativity, their passion, and their wisdom came through in fresh, meaningful, and exciting ways. The assigned focus for this year's sermons was the Ten Commandments (Exodus 20). So you had sermons from nearly 130 young people on pretty much the same texts. No two sermons were remotely similar.

You can imagine how difficult pulling off such an event would be, particularly in this age of such political and religious division. You had members of a number of faith traditions that believe women should not be heard from a pulpit, listening attentively to gifted women preachers. You had white women and men who have never been in an African-American church experiencing the moving cadence and energy of that style of preaching. You had conservative Christians hearing, possibly for the first time, an impassioned, faithful, biblical message from a much more progressive preacher.