Hope Amidst the After Shocks: A Book Review

We walk past a charred skull. Bodies that were close enough to the surface to ﬁnd but too buried to extract had to be burned. Gasoline was poured down the cracks and lit with a match. 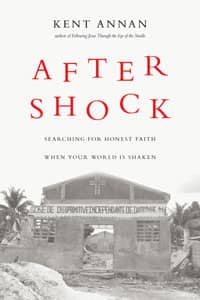 These words from Kent Annanʼs new book After Shock: Searching for Honest Faith When Your World Is Shaken (IVPress, 2011) describe some of what he saw in the weeks following the devastating earthquake that crushed Haiti nearly a year ago. That these words could even be written, let alone describe actual events, powerfully confronts us with the stark reality of a deeply broken world. This is the difficult gift that this book offers to its readers.

Kent Annan, co-director of Haiti Partners, a nonproﬁt focused on education in Haiti, has worked in Haiti since 2003, living there some of the time before moving back to the U.S., now traveling there regularly from Florida. Less than two weeks after the publication of his first book about his work in Haiti, Following Jesus through the Eye of the Needle: Living Fully, Loving Dangerously (IVPress, 2009), that already impoverished nation experienced the historic earthquake that left more than 200,000 dead and millions homeless. After Shock invites us to experience the aftermath of those events on the lives and faith of those left behind:

Faith can seem certain. A sense of peace or clarity, the mysterious beauty of life, or the transformations seen in yourself, in someone else, in a community—it couldn't be other than God. But there are also shocks to the system when God seems either absent or negligent. Do we ignore these shocks and their aftershocks? Sometimes a crisis of faith happens in an instant; other times it's a drift into uncertainty. Welcome confirmations of faith. And just as important, pay attention to the crises of doubt or unanswered questions. Honest faith doesn't deny God, but it doesn't deny the uncertain and painful reality of life either. (from After Shock)

Five months after the earthquake, I had the opportunity to join Kent for a week in Haiti, hearing the stories and seeing the lives of the Haitian people on their own terms. In the book, he introduces us to his friend Enel, a young man who narrowly averted death when the university building he was collapsed on top of him and his classmates. I met Enel on my first day in Haiti; he brought us to the site and told us his story. As he recalled the events of his experience, standing in front the rumble of the university building, a somber group of men carried five plastic wrapped bodies out of the ruins to be loaded into the back of a garbage truck. The suffering and death of the Haitian people suddenly became real.

After Shock is not an easy book to read. Don't misunderstand—it is very compelling. I read it through in one sitting. However, it was difficult to read because of the stark honesty of the author about himself, his faith, his doubts, and his search for God in the midst of suffering. Further, it is a disturbing book, confronting us with our all too common "easy-believism" and shallow (or absent) theology of suffering. Kent forces us to face these difficult truths with the prophetic voice of one who sees through the pretense to the heart of faith. Kent declares what I suspect most of us feel at times: "The monstrous gods we create in response to suffering leave me an atheist at times."

Yet he does so without every being preachy or condemning. In fact, he keeps his hardest critique for himself—not out of false modesty or over-pietistic self-ﬂagellation, but rather out of a rare and genuine honesty. And it is because of this honesty that he so poignantly asks the hard questions of himself, of us, and even of God. Kent admits: "Iʼve been writing this book because my faith might die. I donʼt want it to. But I donʼt want a sentimental faith." And this is what the book invites us into—not a hopeless wallowing in doubt and self-loathing, but a place where faith and obedience meet honesty and uncertainty.

Considering all of this, Kent reflects, "Faith that can't withstand getting rocked by all of this ought to crumble like those concrete buildings. But faith that isn't shaken regularly by life isn't trustworthy either. Maybe this crisis of faith, this search for faith is something like yours."

Reading this book presents a choice: the choice to step into the crucible in which our faith is truly tested. It would be far too easy for us to dismiss the author of this book as faithlessly pessimistic or, far worse, walk away with determination to be more thankful for what we have. Instead, this book is an invitation to see the cross of Christ for what it really is—both in respect to the cost it exacts for our own sin and to the daily taking it up that God requires of us—and to respond accordingly.

Despite the hard reality and difficult questions this book confronts us with, it is also a book that is deeply rooted in hope.

This was the inexplicable, humbling, and imperfect reality I experienced while I was in Haiti: a people who, in the face of unbelievable suffering, choosing to love God and each other in beautiful ways. For, as Kent reminds us, ". . . where there is love in a moment of need, Jesus is there in the shared space between them. Because love is there."

Visit the Patheos Book Club for more resources, reviews, and author interviews related to After Shock: Searching for Honest Faith When Your World Is Shaken.