Job One in 2011: Stand up for Embattled Religious Minorities 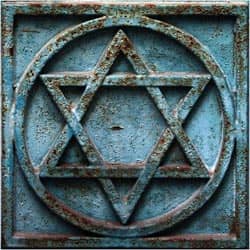 La Brea Boulevard is a major north-south street in Los Angeles that ends under the gaze of the iconic HOLLYWOOD sign. Folks driving past Trader Joe's on Third Street this past Sunday caught sight of what appeared to be a Jewish wedding procession, complete with Chuppah (canopy), a Klezmer band, plenty of rabbis, and cute little kids decked out in their "Sabbath-best."

Only the betrothed wasn't a young lady, and it wasn't exactly a wedding but the renewal of vows between the Jewish people and its sacred Torah. The scroll of the Five Books of Moses had just been completed with the final letters of Deuteronomy inscribed on parchment by a sage scribe. The sponsors—the Teichman family—lost many members in the Nazi Holocaust, so the inter-generational celebration of age-old tradition was especially compelling and poignant.

But we live in a time where we can no longer take such public displays by a religious minority for granted.

Last month, I met in Stockholm with Justice Minister Beatrice Ask and informed her that the Simon Wiesenthal Center was issuing a travel advisory urging extreme caution for Jews traveling to Malmö, Sweden's third largest city. That's because Jews in that city who wear Stars of David, a yarmulke, or who publicly manifest their Jewishness by attending the local synagogue are often subject to harassment from bigots and the cold shoulder from the police, politicians, and prosecutors. The mayor of Malmö, whose largest constituency is Muslim, denigrated his Jewish constituents with this statement: "Malmö does not accept anti-Semitism and does not accept Zionism." Small wonder that the Chabad rabbi's scores of complaints over harassment went unanswered.

And it's not just Malmö. The Chief Rabbi of France cautions Western Europe's largest Jewish community not to wear their yarmulkes in public. In Amsterdam, not so far from Anne Frank's house, police dressed as Orthodox Jews are reportedly running stings to catch young anti-Semitic thugs who internalize the hatred of Jews from satellite programming, extremist clerics, and conspiratorial Islamist websites and social network pages.

The targeting of religious communities extends far beyond anti-Jewish bigotry in Europe.

This past Holy Season for Christians in the Middle East was an unmitigated disaster. First was the terrorist onslaught during Sunday Mass at Our Lady of Salvation Syriac Cathedral in Baghdad where fifty-eight people were killed after 100 parishioners had been taken hostage. In recent years, scores of churches have been attacked and clergy targeted. In 2011, there remain only about 300,000 Christians in Iraq, down from 1.3 million during Saddam Hussein's regime.

Then came the New Year's bombing at the Coptic Church in Alexandria, Egypt, where twenty-one innocents were murdered. It unleashed a torrent of anguish and anger from a religious minority that feels betrayed by its government which refused to take action against the rising tide of anti-Coptic threats prior to the bloody attack. Last week came the assassination of a leading political figure in Pakistan. His crime? Having the audacity of opposing an anti-blasphemy law that placed a Pakistani woman on death row for alleged comments about Mohammad she denies ever uttering. The celebration of that murder by leading religious figures has the six million Pakistani Christians reeling.

All this takes place as mullahs rev up their campaign against Christians in Iran.

The warning signs are all there. Those of us who pray daily to G-d and are lucky enough to live in democracies must take the lead in this New Year and speak out—not to protect religions from blasphemous attacks but to shield members of religious minorities. It is they who are cast as civilization's canaries in the coalmine. We either stand united to protect them or we believers will inevitably join the endangered species list.