Ministering to the Miners: An Interview with a Chilean Presbyterian Leader

Editor's Note: On August 5, 2010 a mine near Copiapo, Chile, collapsed, trapping thirty-three miners 2,300 feet underground. They were rescued, miraculously, sixty-nine days later on October 13th. On October 28, Presbyterian Church (USA) mission workers sat down with the Rev. Manuel Gajardo, a Presbyterian pastor in Copiapo and vice-moderator of the Evangelical Presbyterian Church in Chile.—Jerry L. Van Marter 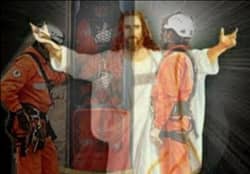 Manuel Gajardo is the son and grandson of miners in Vallenar, a Chilean mining community nestled on the parched western slope of the Andes about 400 miles north of Santiago.

For generations Chile's miners have extracted silver, gold, copper, and iron from these ancient mountains. Like many children in his community, Manuel began working in the copper mines when he was 12. He completed high school when he was 21. Then, still working for the mines, he began to study engineering at the local university in the evenings.

Manuel is also a third-generation Presbyterian. His grandfather learned to read from a Bible bought from an itinerant Bible salesman in about 1900. His grandparents went on to organize the First Presbyterian Church of Vallenar in 1918.

Soon Manuel felt called to the ministry. He decided to set aside his engineering studies and go to seminary. He was ordained in 1985. His whole ministry has been spent in mining communities.

As often happens in Latin America, the churches he served have been too poor to pay him a living wage, so he continued to work in the mining industry, only retiring in 2009.

Gajardo currently serves as vice-moderator of the Evangelical Presbyterian Church in Chile, a mission partner of the PC(USA). The Presbytery of the Pines has a mission partnership with the Chilean denomination.

One of the three congregations served by Gajardo is in Copiapó, about 100 miles north of Vallenar. Copiapó is the nearest town to the San José mine where thirty-three Chilean miners were trapped for sixty-nine days last fall. Most of the rescued miners live in Copiapó.

The Presbyterian News Service talked to Rev. Gajardo about the role played by his congregation during the rescue operation and about the pastoral challenges facing his church:

You have intimate knowledge of the mines, no?

I began working in the mines when I was a boy. I know the conditions in which miners live. Not the best, I can assure you.

Tell us about mining operations in Chile.

We have three kinds of mines in our region: the international mining corporations have very large operations. Then there are smaller mines, mostly owned by Chilean companies. San José is one of these mines. They have less access to safety equipment than some of the large international operations. Finally, there are individual miners who work on their own. These are the miners who live in the most precarious circumstances.

What was the church's immediate response to the mining accident in San Jose?

After the accident, our church began to accompany the families at Camp Hope—after all, they are our neighbors—helping them stay in touch with family members, a sort of telephone ministry.

Now that they are safe, we have been very respectful of their privacy. They know who we are. They know that we have accompanied them during this crisis. We will wait until they want to talk. Right now, everyone wants to talk with them! There are experiencing an avalanche! That's why I said in the pastoral letter (see below) I wrote to our church after the rescue that the miners were prepared to live in darkness, prepared to live for days on end talking only with the mountain. Probably, they are even prepared for collapsed walls in the mine. But this avalanche is different—the media, the whole world, wants to talk to them. That's why we have kept our distance until they want to talk. When they do, we will be available to keep them company and to listen to them instead of questioning them—that's what everyone else wants.

Tell us about the church in Copiapó.

Our church in Copiapó (the town where the miners live) burned down a few years ago. The PC(USA) helped us to rebuild. We have recently inaugurated the first phase of that construction. This is the space from which we can serve our community. We are located in a very poor neighborhood. The miners know where to find us.

How did the economic system that drives mining in the region contribute to the San Jose accident?

The economic system in which we live is very aggressive. The mine owners don't invest much in safety, because they are seeking to maximize profit in the shortest possible time. We have many, many miners working for low wages. Unemployment is high and competition is fierce, even for low-paying jobs in the mines. Even a low-paying job in a mine with a poor safety record is better than working on your own. These are the conditions that led to the accident at the San José mine.