No More "Mental Retardation." So? 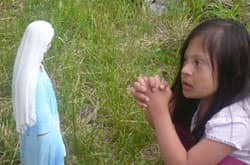 Given the choice, I would prefer my daughter to be called a "retard" and know that abortion of babies with Down syndrome had ceased.

Early last month President Barack Obama signed a law decreeing that federal statutes must no longer use the term "mental retardation." The phrase replacing it will be "intellectual disability."

Many Down syndrome advocates were jubilant, but I am more skeptical. Working in London in the 1980s I was shocked by the name on a building near my home: The Spastic Society. In the United States, we had long before ceased calling those with cerebral palsy "spastics" and I found the term antiquated and offensive. It seems that, every few decades, old terms for those with physical disabilities or cognitive delays are abandoned in favor of new ones, since existing terms have developed a negative connotation.

But drawing a new word from the thesaurus is not enough. We have to respect the right of the mentally disabled to exist. We need to stop aborting them.  Changing vocabulary, while significant, can only get you so far.

As a writer who is also in the pro-life movement I understand the importance of words. Calling an unborn child a fetus, while medically accurate, can depersonalize the child, allowing members of the public to rationalize abortion in the same way that calling certain members of society "useless eaters," "vermin," and "life unworthy of life" eventually depersonalized entire classes of people, including the mentally retarded, and sent them to their deaths in the Nazi concentration camps.

My point is this: if an entire class of people, those with three sets of the 21st chromosome, are routinely targeted for destruction—at a scandalous rate of 90 percent—can merely changing the term we use to describe those 10 percent who escape the net increase respect for their human dignity and intrinsic value to society in a meaningful way?

Isn't a more fundamental change required before having a child with Down syndrome goes from being the greatest fear of pregnant women to being widely accepted by society?

When only 10 percent of people pre-natally diagnosed with this disorder make it to birth, not referring to that lucky minority as "mentally retarded" seems like a hollow victory—as if we are rescuing survivors of the death camp, offering them freedom and food, but failing to shut down the gas chambers for the rest of their race. Can any significant respect be ever given to those with Down syndrome when those who call themselves advocates ignore this ignominious irony?

I would prefer that my daughter be called a "retard," a pejorative term I abhor, and know that the abortion of babies with Down syndrome had ceased. It would mean society had dropped the window-dressing in a willingness to offer people with a unique number of chromosomes the dignity they deserve, which is the only way that true respect for these persecuted members of our society can be established. It is only when they live fully integrated lives in society and become an everyday sight that they will win the respect they deserve.

Whenever I travel in certain circles with my 8-year-old daughter Christina, who has Down syndrome, she creates a stir. Heads turn to confirm what people think they saw, and then the light of recognition dawns; "yes, that was a child with Down syndrome." The process doesn't bother me unless the discovery is accompanied by a look of disgust.

I never see that reaction from children; they are merely curious. Once, a couple of preschool brothers ran to their mom after meeting Christina, exclaiming in animated stage whispers, "Mom, we met a little girl who is Chinese; she looks Chinese and doesn't speak English!"

She tried to shush them, with a worried glance at me, and I calmly assured her that I wasn't offended, since the boys were just trying to make sense of her uniqueness. This may be the first time the boys had ever encountered a child with Down syndrome; they are pretty rare in the U.S., after all.

Recently, an American psychiatrist traveled to Ireland, and was puzzled by the fact that he saw many more children with Down syndrome in the population than he was accustomed to seeing at home. He noted that they were integrated into everyday activities, and marveled at how they were casually accepted in everyday life. Upon investigation into this rare phenomenon, he came upon a surprising fact: abortion is illegal in Ireland, so the 90 percent abortion rate that has virtually extinguished people with Down elsewhere is not operating. The Irish don't do a double take for children like Christina. In fact, they are debuting a cartoon on Irish TV whose main character, "Punkie," is a little girl with Down syndrome. It will be included among the ordinary children's programs.