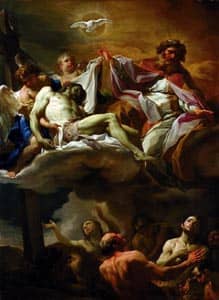 The pope reflected on the saint's writings, saying that "in her mystical experiences, Catherine [of Genoa] never received specific revelations on Purgatory or on the souls being purified there." St. Catherine, he underscored, did not see Purgatory "as a place of transit in the depths of the earth" or as "an exterior fire." Rather, she saw it as "an interior fire." Her insights do not "recount the torments of Purgatory and then show the way to purification and conversion," he added. Instead, "she began from the interior experience of man on his journey towards eternity." For St. Catherine, the soul in Purgatory "is aware of God's immense love and perfect justice; as a consequence, it suffers for not having responded to that love perfectly, and it is precisely the love of God Himself which purifies the soul from the ravages of sin," he said.

Purgatory has had an odd history, with many Catholics today no longer having a clear sense of what it is. And while many Protestants have long rejected purgatory as a non-biblical Catholic "thing," many of the Reformers of the 16th century, while they may have had troubles, to put it mildly, with indulgences or ecclesiastical organization did not initially struggle with the reality of purgatory. The basic reason, I think, is that it makes theological sense. In order to be in the presence of God one must be prepared; since God's being is holy, one must be made ready to be in the presence of holiness. This is the process of purgation, or purification, in which the remnants and effects of our imperfections and sins are burned away.

The other reason, I believe, that some early Reformers continued to teach and accept the notion of purgatory, though Protestants do not do so today to my knowledge, is that a process of purgation is noted in a number of New Testament passages. (For an interesting Protestant perspective on purgatory, see the article by Jerry L. Walls, "Purgatory for Everyone" in First Things, April 2002.)

One of the key "Catholic" passages supporting a notion of purgatory is found in 2 Maccabees 12, a text which is accepted as sacred scripture by Catholics but not by Protestants or Jews. (Some Orthodox Christians do accept the reality of purgatory as a process.) I will cite a large piece of this passage to give it some context:

On the next day, as by that time it had become necessary, Judas and his men went to take up the bodies of the fallen and to bring them back to lie with their kinsmen in the sepulchres of their fathers. Then under the tunic of every one of the dead they found sacred tokens of the idols of Jamnia, which the law forbids the Jews to wear. And it became clear to all that this was why these men had fallen. So they all blessed the ways of the Lord, the righteous Judge, who reveals the things that are hidden; and they turned to prayer, beseeching that the sin which had been committed might be wholly blotted out. And the noble Judas exhorted the people to keep themselves free from sin, for they had seen with their own eyes what had happened because of the sin of those who had fallen. He also took up a collection, man by man, to the amount of two thousand drachmas of silver, and sent it to Jerusalem to provide for a sin offering. In doing this he acted very well and honorably, taking account of the resurrection. For if he were not expecting that those who had fallen would rise again, it would have been superfluous and foolish to pray for the dead. But if he was looking to the splendid reward that is laid up for those who fall asleep in godliness, it was a holy and pious thought. Therefore he made atonement for the dead, that they might be delivered from their sin. (12:39-45)

In this passage, the fact that Judah Maccabee prays on behalf of the dead and makes atonement for the fallen soldiers, who had died due to their sins, so that they would rise again spoke directly to the ability of the living to aid those who had died. This could not be hell, where no aid is possible for the dead, and it could not be heaven, where those who live in perfection do not need our aid, so it must be some other "place." The passage, obviously, not having the weight of scripture for Protestants did not convince them. This is why I think the New Testament passages are significant and need to be understood more clearly.