Shani Oates: Maid of the Clan of Tubal Cain, Part 1

Editor's Note: The Clan of Tubal Cain is part of the Cochrane traditions of Witchcraft, which include the 1734 tradition. For more information read about the founder, Robert Cochrane, and the 1734 tradition. This interview was originally published by Penton Independent Pagan Media and is reprinted with permission. 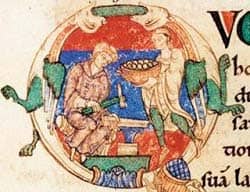 Shani, before joining Clan Tubal Cain, you were a member of a Gardnerian Wiccan coven. Could you please tell us how you came to enter the Gardnerian Craft, and how you journeyed from that into Traditional Witchcraft, becoming the Maid of The Clan?

Certainly, I am pleased that you asked, as I have not yet had the opportunity to explain this aspect of my spiritual argosy. After a lifetime dedicated to folk magic practices, eclectic occultisms, and tentative exploration of various metaphysical orders, I emerged from my solitary working status in 1996 acting on a guiding impulse to seek contact with other Craft practitioners.

After reading a remarkable article by Evan John Jones that set my head afire, I composed a letter stating my appreciation to the editor of The Cauldron.

Unbeknownst to myself at that time, this letter was passed on to John, initiating our seven-year friendship and professional relationship that lasted until his death in 2003. During the two years between ‘96 and ‘98, I continued to meet many souls from all streams and lineages, all with something interesting to offer. I also made several profound friendships, and it was for them I accepted the invitation to explore Gardnerian Wicca through their HPS, even though I made it perfectly clear that it was not a vocation for me, and that my heart resided firmly in the Call of the Horned Piper and the Path of One.

This course of action ran parallel to my true path, my true calling and then, eventually, in 1998, after two years of close and continued correspondence with Evan John Jones, I was both delighted and astonished when John invited me to his home in Brighton. There he urgently announced his intention to appoint me Maid, Heir and successor to the Clan of Tubal Cain.

He desired action immediately, and so I returned a month later in September to undertake completion via the necessary rites. He was totally unperturbed by my two-year advancement within Wicca, being of the opinion that it mattered little and interfered not a jot! In fact he seemed rather pleased that I had done something with my time, getting to know the dynamics of group work and the politics of the Craft. Both things he considered vital for the job ahead of me. He then instructed me to appoint an acting Magister, whence he began mentoring us closely.

Under his exacting tutelage, we were gifted with immeasurable insights, skills, and knowledge regarding far more than the Clan. At the end of the first year, he stepped down, his duty done, ceremoniously handing over his office, all Clan Regalia (as unequivocal symbols of authority), the Inner rites, and key information regarding the Clan's history, etc. Traditionally, these things are given only to the assigned heirs whose public pronouncement determines their legitimacy. Only then did I feel the full weight of the sole mantle, its import and its responsibilities.

This is a fundamental question you have raised, which although covered in my book, is important enough to be discussed further, wherever possible in fact. Due to its import and intrinsic significance, it is one that may crop up within several answers.

Angelic, faerie, or daemonic spirits (often perceived as ancestors) evolved from disparate sources, from merging cultures, overlaying and enriching the synthesis of shared religious ideals. Overtime, magic began to emulate mundane life, rather than life emulating magic. Gradually, these formed the three main branches of the Craft, which are not mutually exclusive, and which do in fact share considerable overlap.

Very briefly, and with great generalization, there is Hereditary Craft—a folk magic tradition, and an important repository of secret customs that are handed down from one generation to the next. These are family versions of the same principles that underpin the whole Craft. Autocratic and hierarchical, each family will have its own beliefs and generally remain closed to outsiders. Rites and rituals are also idiosyncratic to specific families. Their Gods are tutelary, recognizing specific ancestral deities having names known only to them.